Hyperice Hypervolt In-Depth ReviewSuggested ImprovementsFull RatingWhere to Purchase
The Hypervolt Hyperice is the best price point option for massage guns available on the market today. The device is equipped with multiple attachments that are user-friendly to interchange, a long-lasting battery, three different speed options, and most importantly the quietest motor we've used. The Hypervolt is the best portable massage gun currently available.
What our users say star star star star star 3 reviews
Own this product?
Leave a Review
Tweet 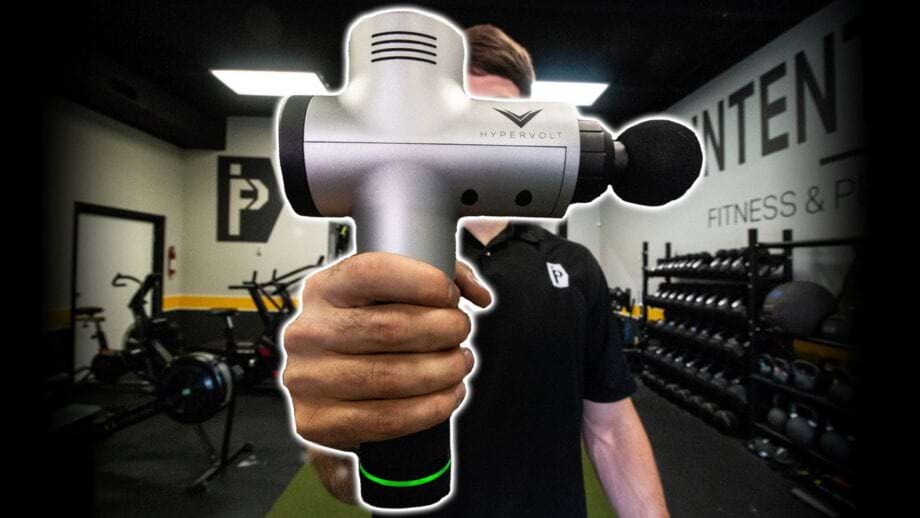 The Hypervolt Hyperice is the best price point option for massage guns available on the market today. The device is equipped with multiple attachments that are user-friendly to interchange, a long-lasting battery, three different speed options, and most importantly the quietest motor we've used. The Hypervolt is the best portable massage gun currently available. The Hyperice Hypervolt is Hyperice's latest piece of recovery equipment and it came out of absolute nowhere.

This isn't the first time you've seen us discuss massage guns. We've reviewed the TimTam Power Massager, showed you how to create your own DIY Massage Gun, and have talked in-depth on the Theragun. 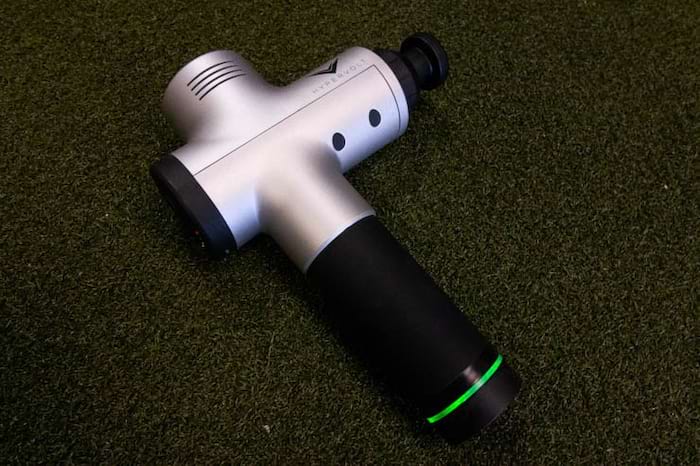 A couple of years ago, the only people who knew of percussion massagers were those that worked in physical therapy and chiropractic work that used heavy, expensive, plug into the wall units. Although these are still available and work extremely well, they're not very practical for the typical consumer. 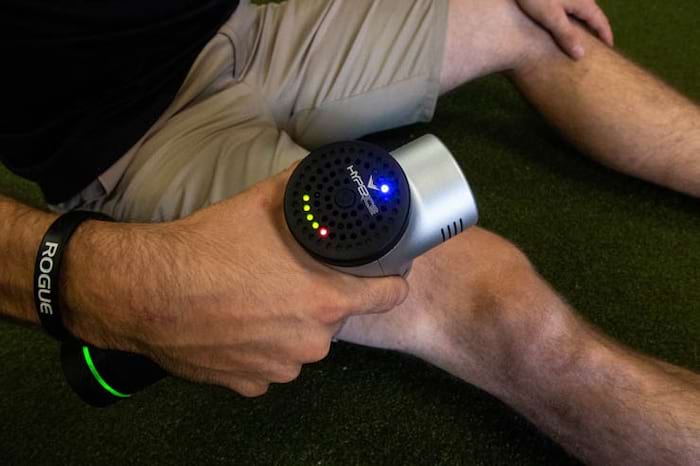 The previous versions of portable percussion massagers haven't been very practical for typical consumers either. The reason, noise. Every percussion massage gun we've tested and used up this point has had one glaring flaw, and that is the noise they produce.

If you weren't aware, the Theragun and TimTam are based on a jigsaw. In fact, the early versions were jigsaws, but with a way to attach round heads. The latest versions have been cleaned up a bit, but they're every bit a jigsaw as the previous versions with a bit more refinement.

The Hyperice Hypervolt, however, is not that way. It uses a completely different motor and because of that, it's still effective, yet MUCH quieter than it's competitors.

Before we get into a review of the actual gun, I think it's important to discuss the effectiveness of vibration therapy. 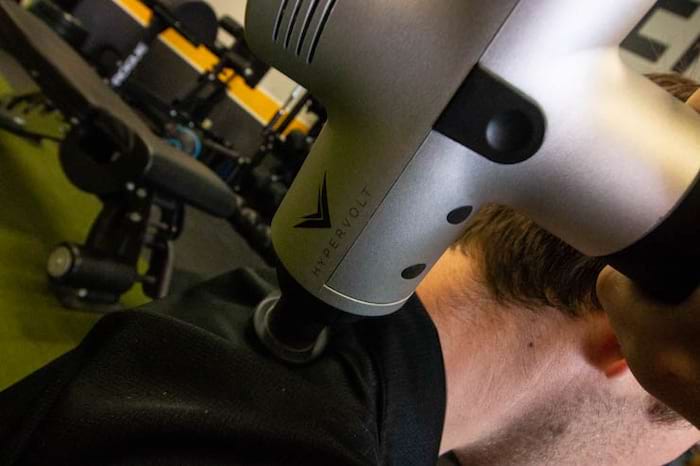 Thankfully, there are multiple studies that point to the effectiveness of vibration therapy.

In a study “To Compare the Effect of Vibration Therapy and Massage in Prevention of Delayed Onset Muscle Soreness (DOMS)” the result was that muscle soreness was reported to be significantly less for experimental (vibration and massage) group (p=0.000) as compared to control group at 24, 48, and 72 hours of post-exercise.

For me, this coupled with the fact that I feel great after using them is enough to continue their use until proven otherwise. 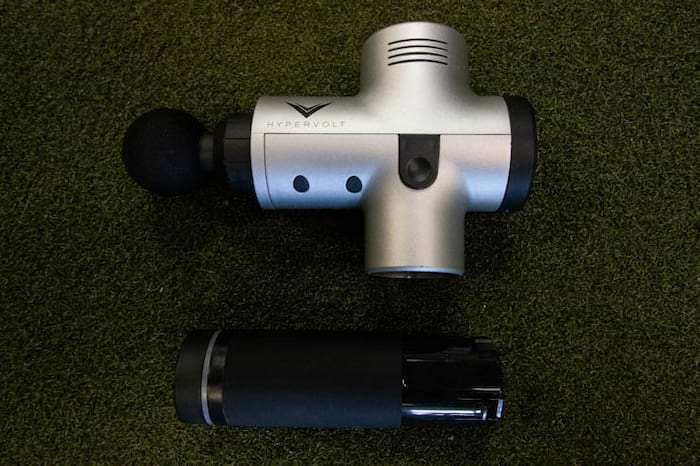 Now, back to the Hypervolt.

Put simply, the Hypervolt made by Hyperice is the best price point option massage gun available on the market today. Period. 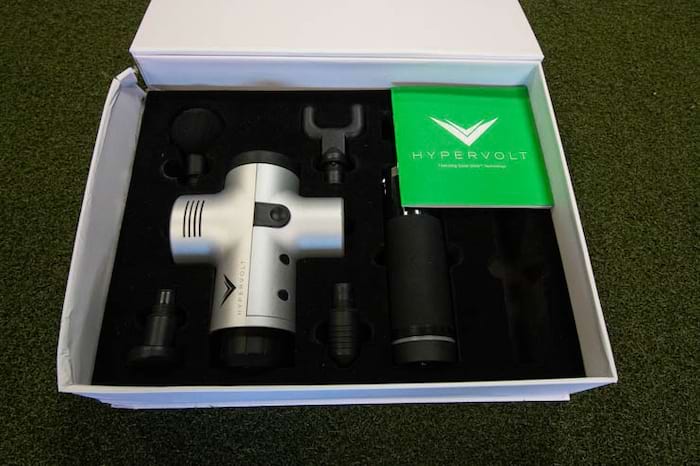 Every Hypervolt comes with multiple attachments to interchange, a long-lasting battery life, and three-speed options to fit the application it's being used for. 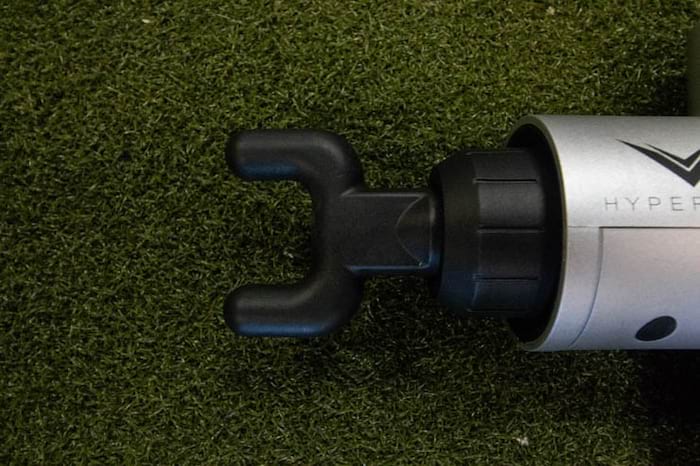 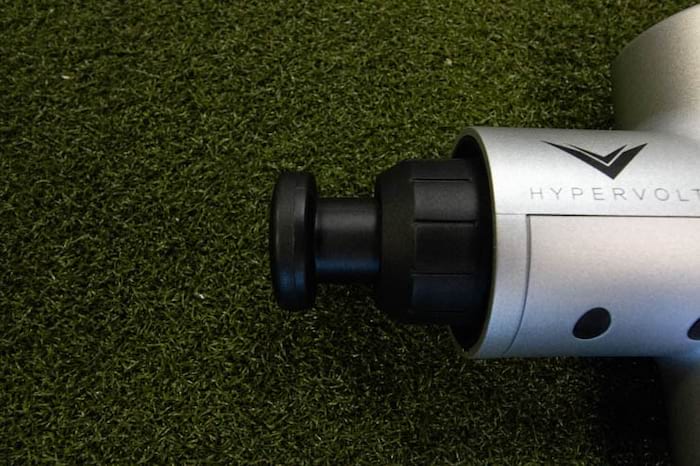 If you are wanting to change from the flat-head to the spear attachment, simply pull out the flat head and push the spearhead in. This process is super easy and convenient. 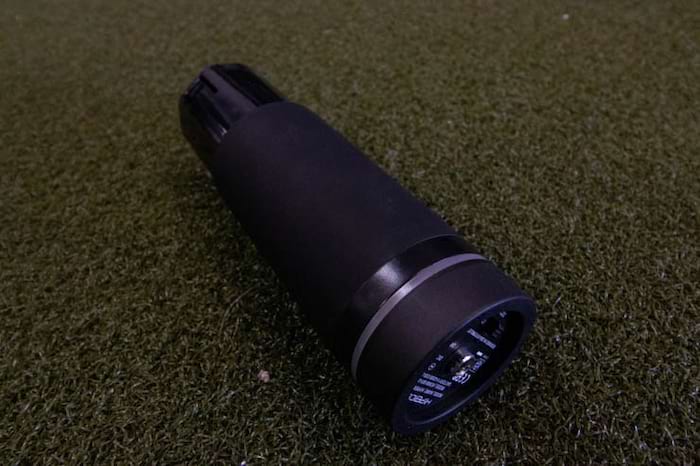 The battery used for the Hyperice is a rechargeable lithium-ion battery, similar but quite a bit larger than what is found in your phone. The specific battery for the Hyperice allows a person up to a stated three hours of use which in our experience seems pretty close. We got a little bit less, but we also used it at the top speed most of the time. 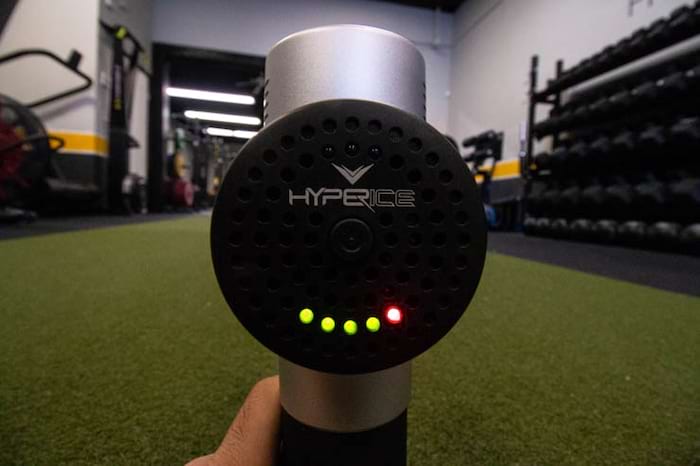 One feature that I really like that the Hyperice features where many others don't is the battery life display. Although it isn't as precise as what your phone shows, the 4 led lights are more than enough to decide when to put the Hypervolt on the charger. 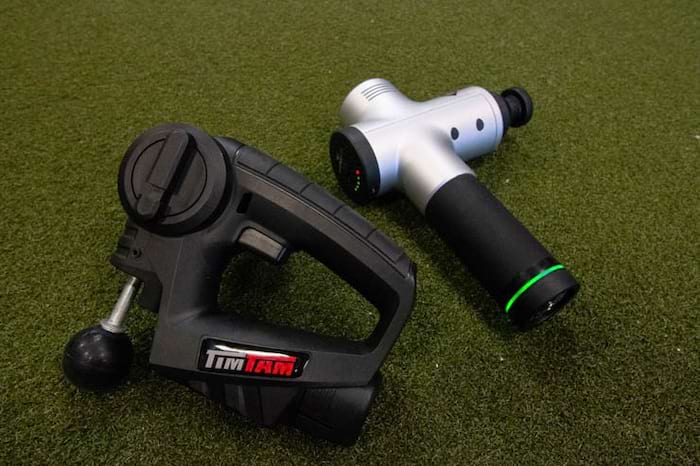 Our previous pick, the TimTam Power Massager had no battery life indicator and would die rather suddenly. This is less than ideal, especially when working with clients.

The Hypervolt has four green lights and one red light. The green lights fade away as the battery power becomes lower. 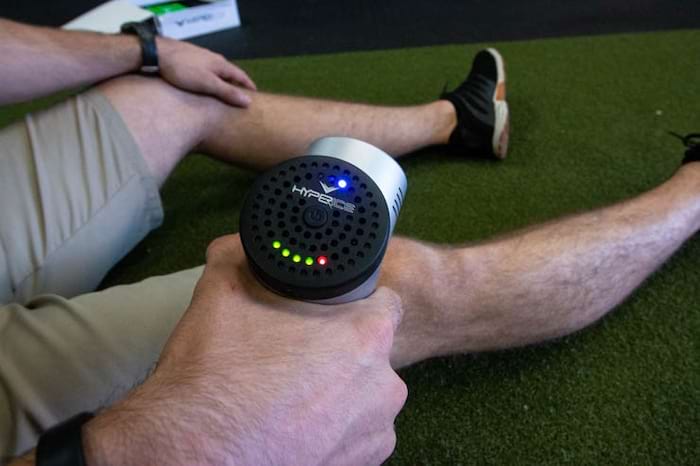 Not only is the Hyperice able to do all of this, the device is also relatively light weighing in at 2.5 pounds. It's light enough to work on yourself with one hand, but substantial enough that you don't feel like you're able to push against it with much force. 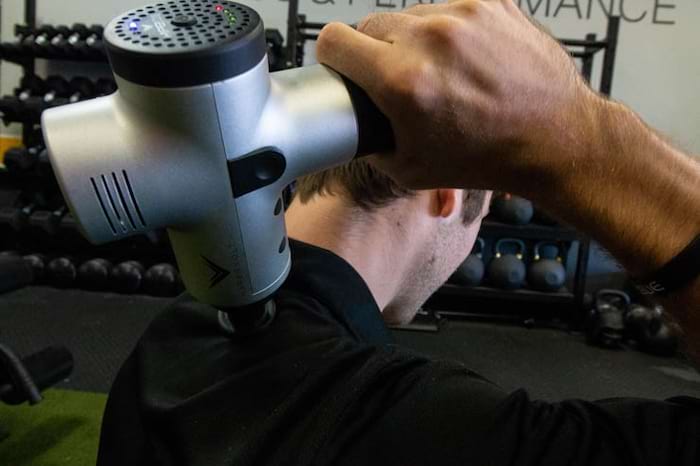 Another great feature of the Hyperice Hypervolt that separates it from competitors is that it has multiple speed options. Most other percussion massagers go all out as soon as you press the trigger, the Hypervolt doesn't even have a trigger. Rather than having to hold down the trigger, you simply press the power button on the back of the device and it's ready for use. If you want more power, you press the button again. It's that simple. 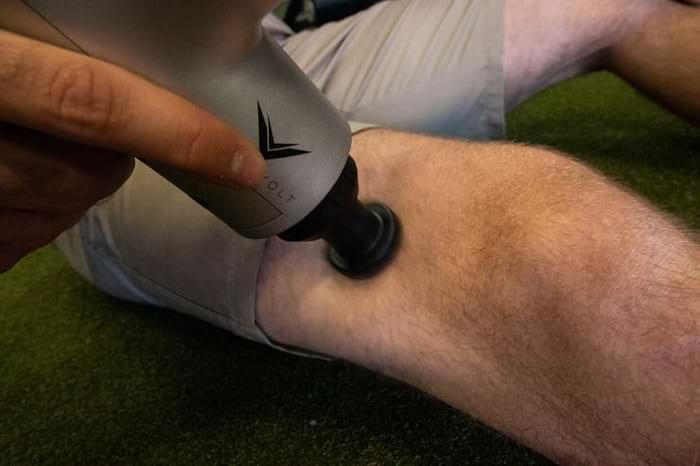 On top of that, the Hyperice has an led light system on the back of the unit to display exactly what speed you are at. 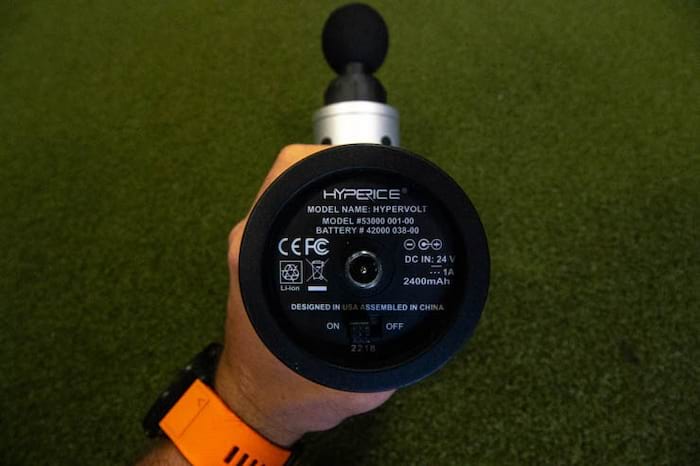 The battery portion of the device features a rubber coating that provides a sure grip so that it doesn't slip out of your hand.

The Hyperice has multiple features that you cannot find on other massage guns. 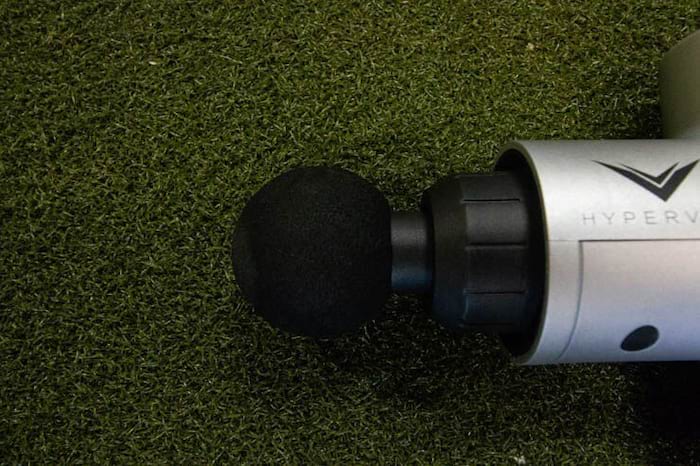 Another feature that causes the Hypervolt to stand out from its competition is the accessory heads. Most companies (pretty much all) require you to purchase the heads separately from the unit despite the heads being very cheap to make. 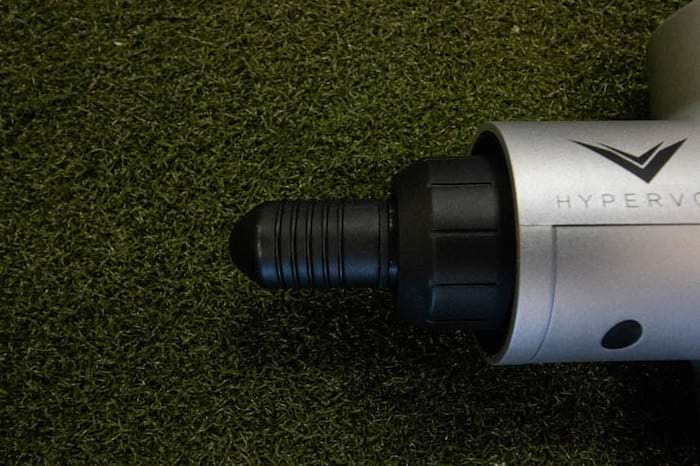 The Hypervolt comes with four different heads and I don't see the need for any additional at this time. 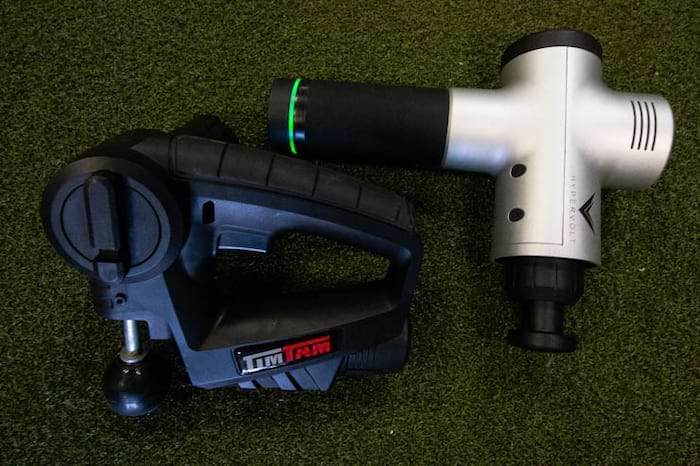 Although all of these features are great, far and away the biggest benefit for the Hypervolt is that it is unbelievably quieter than its jigsaw competitors. Hyperice leans on their Quiet Glide technology for that which literally allows you to carry on a conversation while massaging. That's not just a marketing phrase, it actually works in that way. 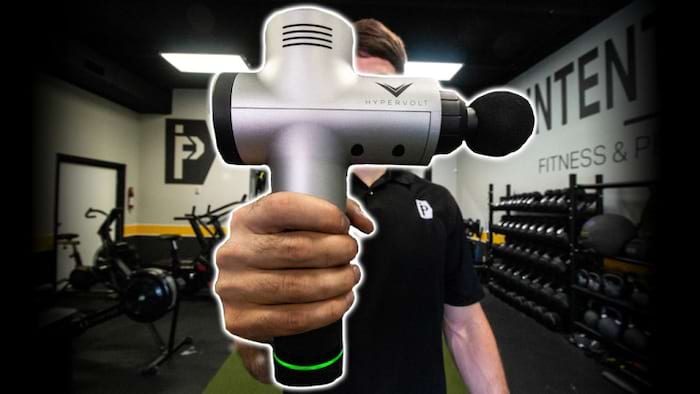 Finally, the Hypervolt looks like a professional tool. It's sleek black and silver build along with the fit and function look like a gen 5 product, not a first iteration. Hyperice has absolutely hit it out of the park with the Hypervolt.

Overall, the Hyperice by Hypervolt is the best option when looking at different massage guns available on the market today. With its multiple speed options, four different head attachments, and great price point, we highly recommend the Hypervolt.

In my opinion, the Hyperice is the best price point option when it comes to percussion guns. With that being said, there are some things that would be a great addition to the device.

One feature that would make this device even better is a rotating head. The TimTam is able to move 90 degrees and it would be great if the Hyperice could do the same. Another percussion gun called the TheraGun, has four different locking points within a 90-degree radius.

Finally, producing the Hyperice with multiple color options would take it to the next level. I love the classic gray and black look, but I would also like to have other options when making a purchase.

The Hypervolt Hyperice is the best price point option for massage guns available on the market today. The device is equipped with multiple attachments that are user-friendly to interchange, a long-lasting battery, three different speed options, and most importantly the quietest motor we've used. The Hypervolt is the best portable massage gun currently available. 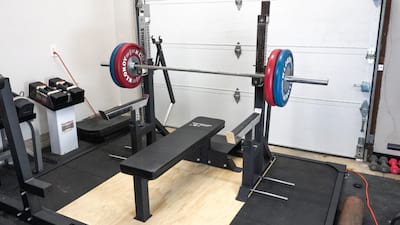 The StrongArm Sport Combo Rack is the best budget-priced combo rack currently available (it's also the only one.) Overall, with price being considered, we think it's a rack worth taking a look at if you're on a budget and have to have a combo rack. This said, there are some things we'd like to see improved and foresee there being quite a bit of competition at this price point in the near future. Read More

The Ghost Strong Combo Rack HD is one of the most high-quality, custom squat racks on the market. Designed specifically for powerlifting, not only is the function of this rack extremely high, but so is it's good looks. If you want the best and don't mind paying for it, this is a hard rack to beat (although there are some things we would like to see improved.) Read More

After using the Sorinex Glute Ham Roller extensively over two months, we can confidently conclude that this is one of the most versatile pieces of equipment for the amount of space it takes up that's currently available. Not only is it incredibly versatile, but it's also extremely space efficient and economically priced. Simply put, we're big fans. Read More

The Rogue Plate Carrier is a simple, yet well-thought-out weight vest designed to make bodyweight movements more difficult. The 5.11 Tactical Weight Vest is our previous favorite weight vest, however, Rogue’s Plate Carrier strips unnecessary components from the competition to make one of the best weight vests we’ve ever tested. Read More