6/5/2019 After using the Rogue SML-2 for nearly 5 years now, we confidently continue to give it the same recommendation. It's an incredible rack, and has held up to everything we've throw at it.

The Rogue SML-2 Squat Stand is one of the best squat stands available. It's stout, has many accessories available, and is priced really well. We highly recommend the SML-2 for anyone that wants a squat stand that doesn't take up a ton of space. Rogue SML-2 Squat Stand
(6 ratings & reviews)
The SML-2 Monster Lite Squat Stand delivers much of the strength and versatility of a power rack in an efficient, compact frame. Featuring 3x3” 11-gauge steel uprights, an adjustable fat/skinny pull-up bar, and 5/8” holes in the Westside spacing pattern, it’s an affordable hybrid of Rogue’s 90” S-2 and Monster SM-2 squat stands.The American-made SML-2 is equally equipped for squats, bench, pull-ups, clean pulls, floor press, and more. And with a footprint of just 49" x 48", it's a squat stand well suited to both a garage gym or a large-scale training facility.The SML-2 is manufactured in Columbus, Ohio, using (2) heavy-duty 11-gauge 3x3" square laser-cut steel uprights and (3) 2x3” 11-gauge steel base tubes for optimal stability. The unit includes laser-cut 5/8" diameter holes and SAE grade 5 bolt hardware. The finish is our signature black powdercoat.While it’s called a squat stand, the 90” SML-2 can be used much like a full-scale power rack, from bench work to pull-ups, clean pulls, floor press, and more. The unit has a weight capacity of 1,000 LBS, but creates just a 49" x 48" footprint in your gym, making it a space efficient option that gives up little in functionality.Every weld and laser-cut at Rogue is inspected individually at each step of the process for integrity and appearance. Every part is again individually inspected for finish after the powder coat process. The entire package receives a final comprehensive quality assurance check before it’s shipped. Once in use, the SML-2 is guaranteed by Rogue for Life.Even without custom additions, the SML-2 comes with all of the hardware and basic accessories necessary to have a pro-caliber squat stand at your disposal. This includes all necessary 5/8” bolts and fasteners, a pair of Monster Lite J-Cups (with protective UHMW plastic inserts), and your choice of either a Fat/Skinny or Single Pull-Up Bar.

Rogue Fitness in my opinion is the premier garage gym equipment supplier. They have everything with top notch quality and service. I've seen so many stories of somebody complaining about something going wrong with their order or shipping and the owner Bill Henniger personally making things right. That among other reasons are why I have a lot of Rogue gear in my garage and that's why the centerpiece to my garage is the Rogue SML-2 Squat Stand. 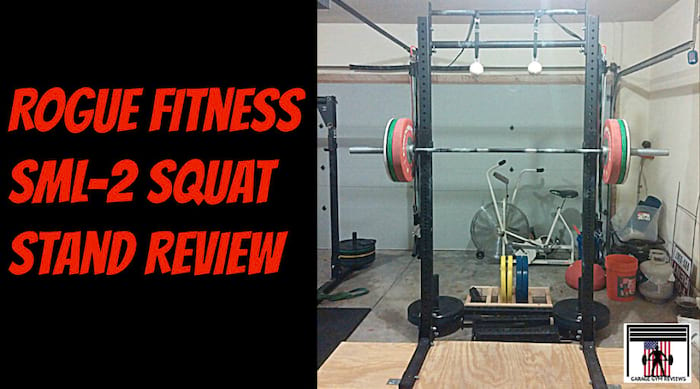 The main difference between the different squat stands is the gauge of the steel, width of the uprights, and hardware used to keep the racks together. They have the Echo, Infinity, Monster Lite, and Monster lines. For the majority of the population the Echo and Infinity lines are more than enough. All of the lines use 7 gauge steel except for the Monster which has 11 gauge steel. The left over difference then comes down to the width of the uprights. The Echo is 2x2, Infinity 2x3, Monster Lite is 3x3, and the Monster is 3x3 with the addtion of 11 gauge steel and heavier duty hardware. Do you need thicker gauge steel? Do you need heavier duty hardware? Do you need wider uprights? I'll answer this question for most of you... NO! But if you like the look and the security of knowing the rack can hold 10x more than you'll ever squat than you have my permission to splurge--like I did.

How it was acquired:

I purchased this bad boy straight off of Rogue's website along with a Rogue Ohio Bar and their HG plates which both will be reviewed later on. As I'm sure many reading know, Rogue ships fast! So I received like 3 days later after ordering it and had free shipping because I combined a bar and plates along with the rack.

When you go to purchase the Squat Stand there is a drop down asking if you want a single skinny bar, or the combination of the fat and skinny bar. Due to my height (5'10"), I knew that purchasing the combination skinny and fat bar wouldn't be a problem. That being said, for the majority of people I would suggest purchasing the single skinny bar. The reason is because for most reading this, you are doing Crossfit workouts and will not use the fat bar very often. Secondly, the bar is bolted to the rack so flipping it can take some time, well at least it did until I did a little modification that I'll explain later in this review. I've also seen it suggested and can see how it would work wonderfully if you have the tools to purchase the combination bar and just cut it in half, giving you two bars. That being said if you're doing mostly metcons, go for the skinny bar, its the one you'll find in any Crossfit Gym and the one you'll use most often.

The J-Cups that come with the Squat Stand are out of this world! First, they're made out thick powdercoated steel, and weigh around 7.5 lbs. a piece. More importantly, they're rated to hold a 1000 lbs. I've seen very few people walk out a bar weighing a grand from a squat rack outside of 'Captain' Kirk Karwoski (video here) but if you wanted to, these J-Cups are rated for that heavy of a bar. One thing I really like about Rogue is their attention to detail. The welds on the J-Cups are all even and clean, and to protect the knurling on your bar they bolt UHMW plastic on top of the J-Cups. Just put the J-Cup in the rack horizontally, once all the way in drop it to vertical and they are locked in ready to take any abuse you throw at them. In fact, I was once Overhead Squatting at a Crossfit Gym that had a Rogue Rig and I dropped the bar with 225# from overhead on the J-cups, and they barely even budged. (Don't test this out though) 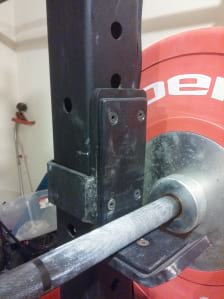 I can not stress enough that if you'll be benching alone using the Squat Stand that you should purchase the Safety Spotter Arms. You do not want to be pinned by a heavy bar by yourself in your garage, that's how people die and stories come out every year about some kid putting too much weight on the bar and choking himself out Cold Stone Steve Austin style with a bar on his neck. Don't be that guy. The Spotter Arms look like a machine gun and often when I'm putting then on my rack I'll pretend I'm Rambo (just another added benefit.)

The Spotter arms come with the same UHMW plastic to protect your bar, and also have hitch pins to keep the spotter arms in place although I don't think they're needed. I've used the Safety Spotter arms for everything from a DIY Reverse Hyper which I will soon be building and explaining to rack pulls and box jumps. I've also used it as a makeshift work bench which I will also create a DIY post for later on. The only downside about the Monster Lite series is the accessories cost more due to them being heavier duty, but I'm glad I went the route I did. 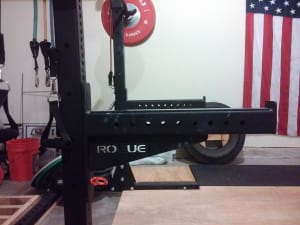 Well yes, sorta. As it comes it will rock when kipped on. However if you put some weight on, I used sandbags when I first got it, it will stand up pretty well to any kip/toes to bar you throw at it. Granted if you can, I would bolt it to a platform like I did. The problem with just putting the weight on the base is that it still rocks and moves some, but it's still usable. I went ahead and bought an Again Faster Home Pullup Bar to hang on my ceiling that has made doing butterfly pull-ups on a breeze.

On nearly anything I buy, I do some sort of modification to make it suit my preferences. The first modification I made was taking the side plate storage that came with my Rogue Y-1 Yoke and putting it on the base of the stand as seen here: 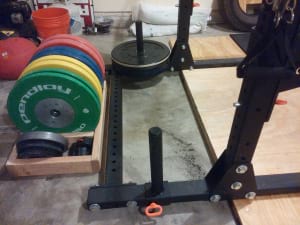 Next,  I took the bottom bolts off of my combination pull-up bar and put trailer hitch pins that way I can spin the bar from Fat to Skinny easy and without having tools. You can see it here: 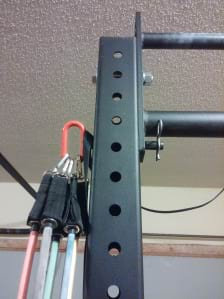 The last modification I made was bolting the Squat Stand to my weightlifting platform. I went to Home Depot and purchased two L brackets, bolts, washers, and lag bolts and bolted it down. In order to make the Squat Stand even with the platform I took a 2x4 and put it under the back of the base and used commercial double sided tape to keep it from shifting around. It's worked out great. You can see pictures of the details here. 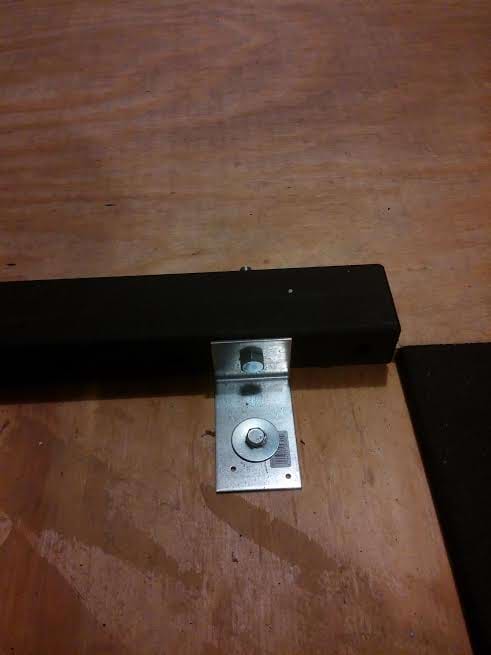 For further details on the modifications including how to build the platform check out my DIY Instructions here: DIY Weightlifting Platform with Squat Stand Attached

Would I buy another one? No, only because I also have a Rogue Y-1 Yoke and find it more versatile. If I could do it over again I would buy the Y-1 Yoke instead of the Squat Stand and buy another stand-alone pull-up bar. I also now have a Rogue R3 (click to read my review) which in my opinion is one of the best power racks available. However, if you'd like a Squat Stand that is mobile, takes up little space, and includes a pull-up bar I would highly recommend you check out the Squat Stands from Rogue. Their customer service is excellent, and the quality of their equipment is even better.

The Rogue SML-2 Squat Stand is one of the best squat stands available. It's stout, has many accessories available, and is priced really well. We highly recommend the SML-2 for anyone that wants a squat stand that doesn't take up a ton of space.

After using Rogue Kettlebells for over 5 years including the Powder Coat version and new E-Coat version as well as practically every competitor on the market, I believe the new Rogue E-Coat Kettlebells are the best kettlebells on the market for most people. They are made in the USA, use a superior finish to powder coat, have a tight weight tolerance warranty, and come in every weight increment desired all at one of the most affordable prices available. Read More 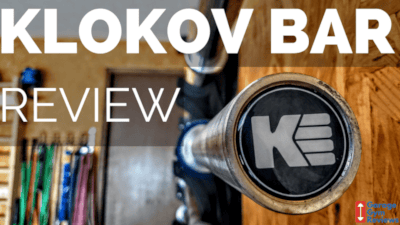 After putting the Klokov 20 KG Weightlifting Bar by Klokov Equipment through a combined 23 workouts including clean and jerks, snatches, squats, and deadlifts, we believe that the Klokov Bar is an economically priced version of the Eleiko Training Bar and can compete with the Rogue Euro Olympic WL Bar. The Klokov Bar features many of the same characteristics of IWF Certified weightlifting bars at a slightly reduced cost. Read More

Snake Bite Grips are an attachment that increases the diameter of a barbell or dumbbell to create thick grip. They're very similar to Fat Gripz, but with a unique, laser-etched snakeskin knurling pattern that feels as good as it looks. We do prefer these to Fat Gripz, but still recommend Fat Gripz for most due to a lower price point. Read More