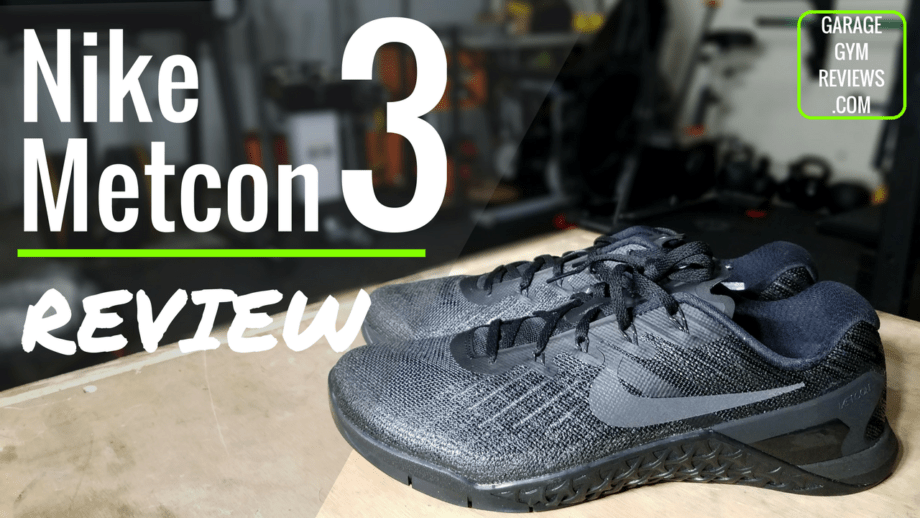 Editor’s Note: The Nike Metcon 3s are no longer being made; check out our Nike Metcon 7 review for information on the latest from Nike! 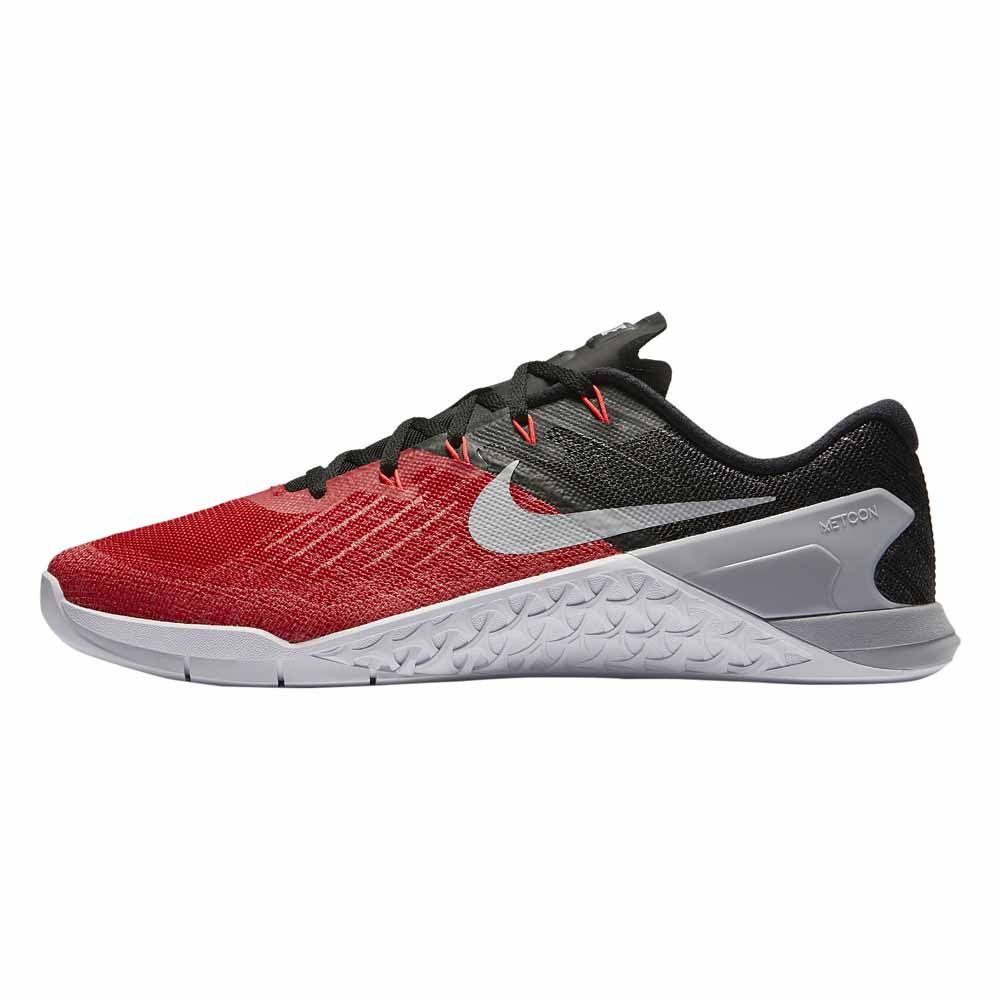 The Nike Metcon 3 keeps all the critical design components of the previous Metcon series while introducing an updated drop-in midsole—for max stability + flexibility in the forefoot—along with a new range of colors. This is one of the most versatile, high-performance cross-training shoes ever developed, and it’s trusted by a wide range of athletes at the highest levels of competition.With a firm rubber heel, low-profile heel clip, and exclusive Flywire technology, Metcons are built for a lockdown fit and a dependable flat platform foundation, improving explosiveness on heavy lifts. The shoe’s molded flex grooves, light breathable construction, and embroidered TPU reinforcement also make it uniquely optimized for sprints, climbs, box jumps, distance runs, and day-to-day abuse.An abrasion-resistant film around the midfoot is critical to reducing heat and friction during a high octane training regimen, and the Metcon’s dependable traction performs on the gym floor, the track, and training grounds far off the beaten path.Specifications:Men’s Cross-Training Shoe, new for 2017 Updated drop-in midsole for added cushioning and flexibility Low profile, max-support heel for stability and minimizing drag Molded flex grooves in the forefoot Lightweight Vectran filaments (Flywire) for optimal structure and support

The only shoe in the fitness world that has had as much hype as the new Metcon’s were’ the old Metcon’s. ðŸ˜‚ðŸ˜‚ðŸ˜‚

Seriously, Reebok is producing some great training shoes, especially theReebok Nano 6.0, but Nike owns the hearts and minds of athletes and sneakerheads the world over.

When I initially leaked the Nike Metcon 3’s, there was a lot of confusion on whether they were made of FlyKnit or just a different mesh. Finally, as I’ve detailed in other posts, there are two different training shoes available.

In this article, I will only detail the Nike Metcon 3 and will review the DSX Flyknit’s later on.

In my opinion,the Nike Metcon series is the best looking training shoes around.

If I were going to buy a shoe SOLELY based on its looks, the Metcon’s would be the only shoe I’d buy. I don’t know if it’s because I’ve been indoctrinated to like Nike because of all the great athletes they sponsor, or because they truly are the best looking.

Either way, the swoosh always gets me, and after having read Shoe Dog by Phil Knight (Nike Founder), I’m even more of a fan of Nike.

So, when the Nike Metcon 3’s came out, I knew Nike wouldn’t have to do much to win me over. And so far, the only training shoe I would actually workout in that looks better is the Nike Metcon 2.

Yes, in my opinion, the Nike Metcon 2’s lookbetter than the Metcon 3’s. But, Nike still has many more colorways to release.

One of the parts of the new Metcon’s that I am really digging is the sole.

The sole on the 1’s and 2’s both looked cool, and I thought it was a great idea to extend it up the sides for rope protection. But, the alien-looking sole on the Metcon 3’s just takes things to a whole other level.

Seriously, that outsole is beautiful. I also don’t think I’ve ever said that.

The other thing regarding Nike shoes that nobody ever complains about, including me, is the logo.

No matter how big Nike makes their logo, people just want more of it. There is not a company I can think of (except for maybe Patagonia) who I will not complain about there being a visible logo. This is the position Nike has put themselves in, and to think, they spent a measly $35 for the swoosh.

Although I like the looks of the shoe, I think the best part of the shoe is how it’s constructed.

Nike is known for making good, quality shoes. They’re not going to be handmade, super-durable shoes, but you’d expect fantastic quality control from one of the largest companies in the world, and that’s what you get.

One reason for much of the confusionin the initially leaked photos is because the Metcon 3’s look like Flyknit. Even when you’re holding them, they look like they’re made of Flyknit.

The other material that was on the upper of the Nike Metcon 2’s was a thermal wrap. Although the wrap provided some rigidity, it was also very thick and over time begins to crack. Especially for thoseof you who leave your shoes in your gym bag (you know who you are.)

It appears that Nike has kept the thermal wrap, but minimized it allowing the upper to be much more pliable and hopefully less prone to cracking.

With the subtraction of so much thermal wrap makes the Metcon 3’s a much more comfortable shoe that feels more like a sock, though not as much as a pair of flyknits.

The toe box uses the same mesh as seen in the 2’s, which is a positive due to its breathability.

The biggest change to the looks of the shoe is the addition of TPU plasticon the sides of the heel.

TPU is a hard plasticthat’s been used in the past by Nike on their heel clips.

If you remember, when the Nike Metcon 2 was released, one of the biggest features was the heel clip that allowed for easier sliding along the wall for things like handstand pushups. I always thought this was a cool feature, but people made it seem like they did HSPU every workout.

Anyways, the TPU on the side of the heel adds increased rigidity and a more locked in feel for your foot. That said, it doesn’t completely eliminate the heel slipping that so many have experienced with past Metcons.

The heel clip has returned in a more subtle form. Rather than being a clear plastic with opposing colors, it now blends in with the sole and sits a bit lower.

One issue I personally have with the heel clip is it teaches people improper technique on handstand pushups. The toes should, in all reality be pointed to the ceiling, allowing the entire body to be tight. The only way to use the heel clip on Metcons in its current style is to point the toes forward. But, then again this is pretty nitpicky.

As I stated earlier, the outsole on the Nike Metcon 3’s is one of the standout features.

It not only looks cool, but it also performs really well. Often times, the design of the outsole is an afterthought. But, due to the sole extending up the sides of the shoe for rope protection, Nike took the look of the outsole into serious consideration.

In stark contrast to my love for the outsole, I absolutely can’t stand the insole.

I’m not kidding. There is no difference between the soles, which also probably means there won’t be much of a difference in the squeaking.

Now, there hasn’t been any squeaking yet, but I’ve only had the shoes for a short period of time. The Metcon 2’s typically didn’t begin to squeak until after a couple of months worth of workouts.

In other words, my fingers are crossed, but I’m doubtful.

I don’t care if a shoe is made of rare earth metals and looks like a piece of art, if it doesn’t perform, I won’t wear it.

To be honest, despite me reviewing just about every training shoe under the sun, most people could stand to focus more on their training and less on their apparel.

As Louie Simmons likes to say:

With that rant over, the performance of the Metcon 3’s is comparable to the 2’s, with one caveat.

The overall feel of the 3’s is better than the 2’s. It fits much more like a sock than a rigid shoe. This is how a training shoe should feel, and I believe companies will continue to lean more that way over time.

The issue that is still very much present about the performance of the Metcon 3’s is the heel slippage.

Although the TPU plastic on the sides of the shoe do allow the heel to feel more locked in, there’s still some slipping on runs and jumps.

Overall, the Nike Metcon 3 performs similar to the 2’s, with a slight edge in relation to it’s more locked-in feel.

Nike has released many colorways, here are a few of the early release models.

How do the Nike Metcon 3’s compare to the Reebok Nano 6.0’s?

The Reebok Nano 6.0’s are the shoe I personally use for most of my training. The main reason is that it fits my foot slightly better.

I have a thin foot, and the width on the Metcon 2’s made the shoe a little uncomfortable.

Overall, I’d say the Metcon 3’s are comparable in performance to the Nano 6.0’s,but look better than the 6.0’s.

What size should I get?

The Nike Metcon 3’s run in similar sizing to the Metcon 2’s. I got the same size, a size 10 and they feel the same, with the 3’s being slightly tighter around the toe box.

When will other colors be released?

Nike tends to release new colors every couple of months. There doesn’t seem to be a set schedule, but I will update this page as they’re released. Expect A LOT of colorways.

Should I just stick with the Metcon 2’s?

The Metcon 2’s are a great shoe, and the release of the 3’s does not cause the 2’s to be obsolete by any means.

The 3’s are an upgrade, but if you’d rather not spend extra for the latest and greatest than get some Metcon 2’s on clearance.

Should I get the Metcon 3’s or the DSX Flyknits?

If you like flyknit and want more of a sock feel, go with the Flyknits. That said, the performance isn’t $40 better in my opinion. 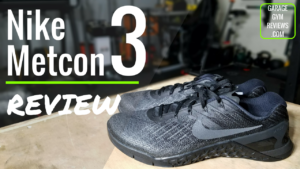 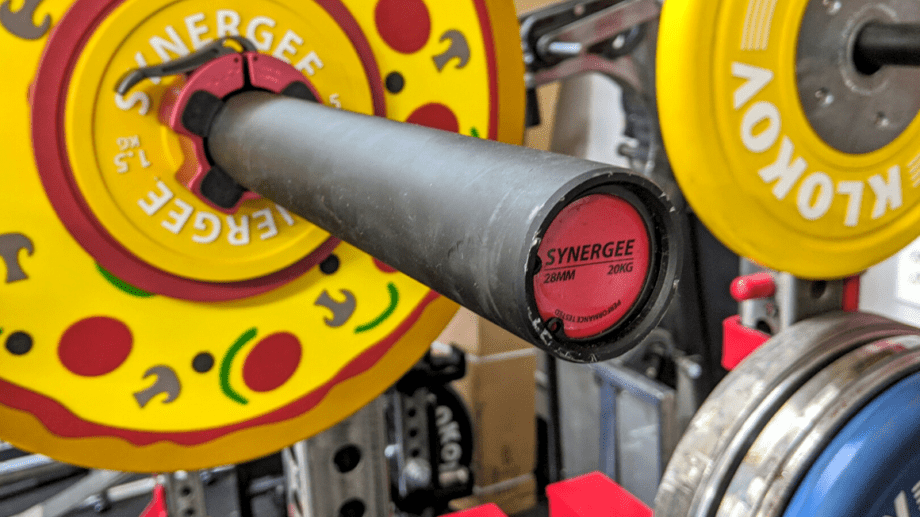 The Synergee Games Cerakote Bar is very much a more budget-friendly Rogue Cerakote Ohio Bar. It's not made in the USA and uses some different components like a thinner shaft and bearings instead of bushings, but for the price point, this is a great alternative for those wanting a cool looking CrossFit Barbell. Read more 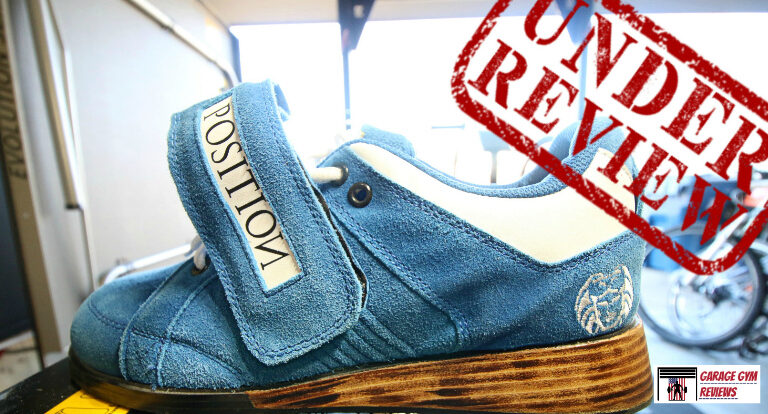 MYX vs. Peloton 2022: Which Is the Better Indoor Exercise Bike?
by Anthony O'Reilly

It’s the battle of cycling bikes: MYX vs Peloton. Which exercise bike should you buy for your home gym? We’ll tell you. Read more 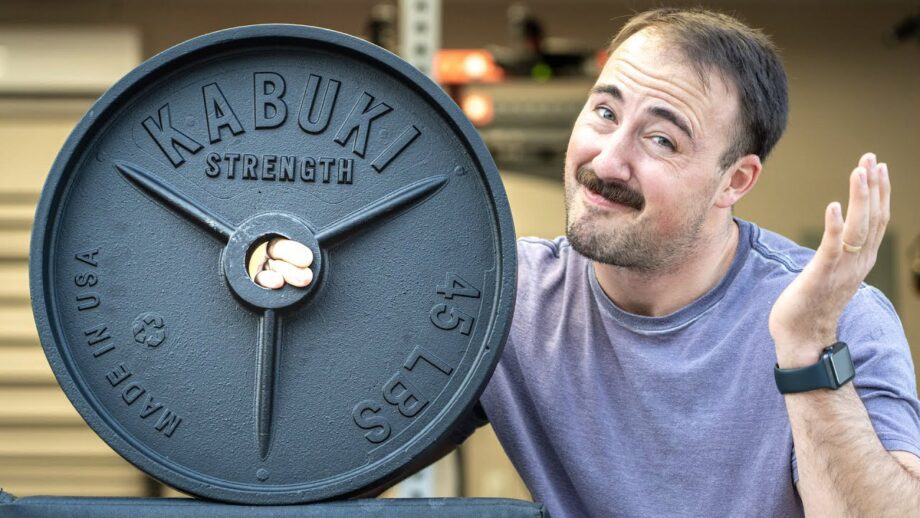 Kabuki Strength Iron Plates Review: Economical Option, But Not The Best
by Coop

The Kabuki Strength Iron Plates are the latest USA-Made weight plate to be released. After training with them for a couple of months and comparing them to the other options available, we feel these are a good, economical plate, but not Kabuki's finest. There are certainly flaws, but the price (when shipping isn't factored) makes them understandable for the value offered. We do recommend them if you're excepting something budget-friendly and understand the downsides. Read more