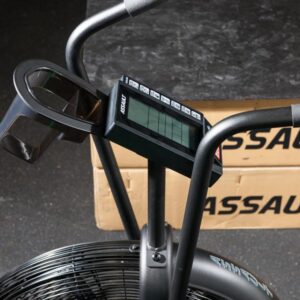 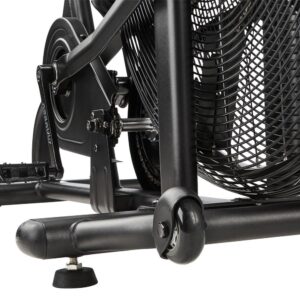 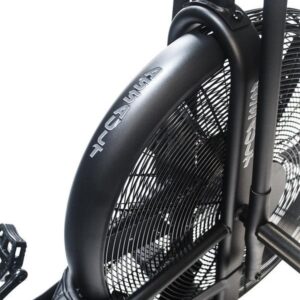 We review free products that we receive and participate in affiliate programs, where we may be compensated for items purchased through links from our site. See our disclosures page for more information.

Finally, a heavy-duty exercise bike designed directly from the feedback of athletes and coaches. The Assault AirBike reinvents and retools nearly every component of the traditional fan bike, from the frame construction to the crank, pedals, monitor and more.

Finally, a heavy-duty exercise bike designed directly from the feedback of athletes and coaches. The Assault AirBike reinvents and retools nearly every component of the traditional fan bike, from the frame construction to the crank, pedals, monitor and more. The series is designed and tested in the USA by the experienced team at LifeCORE Fitness in Carlsbad, California.

Using air resistance, the Assault AirBike scales automatically to how hard you want to work. The harder you pedal, the greater the resistance. It’s simple physics with big benefits.

The great thing about the Assault AirBike is that it can work for a beginner, a rehabbing athlete, or a seasoned pro training at the highest levels of competition—no matter their sport, body type, or ambition. While fanbikes have existed for nearly half a century, modern advances in their design and function have made them increasingly in-demand among military personnel, pro and college sports teams, competitive cyclists and sprinters, and high performance athletes from the cross-training ranks. The key: you set your own pace. The resistance adapts to your own output, and the bike’s multiple, custom seat adjustments make for a more comfortable, customized ride.

In the age of smartphones and tablets, an old-fashioned, clunky fitness bike monitor simply doesn’t cut it. The Assault AirBike’s state-of-the-art LCD display console is still easy to navigate at the push of a button, but your customization options—from on-board programs to instant, multi-faceted monitor feedback—is almost limitless. Athletes can simultaneously track their heart rate, speed, RPM, time, calories burned, and more. Even watts can be monitored with precision accuracy, thanks to the AirBike’s 20-horsepower electric motor and carefully calibrated torque measurement meter. You won’t just feel the effects of a good workout, you’ll be able to see the science behind it in real time.

LifeCORE threw out many of the old stationary bike manufacturing methods and focused on a powerful new 21st century bike that could handle daily abuse at the best gyms in the world. Each bike is equipped with a thick-gauge chro-moly steel frame, with at least 1-2 sealed cartridge bearings in EVERY single pivot—from the flywheels and pedals to the bottom bracket and linkage arms. There are over 20 bearings in all, unmatched by most fitness bikes in the industry. The goal isn’t just reliability—it’s zero wobble and zero maintenance required over thousands of hours of use.

The Assault AirBike has become the standard air bike for CrossFit athletes. In our testing and reviews of the bike, we've found it to be durable and enjoyable (not in the traditional sense) to use. We recommend the Assault AirBike only if you can't afford the Rogue Echo Bike or Schwinn AD Pro or you want a chain-driven air bike.