Teeter is the creator of the best-selling inversion table of all time. The Teeter FitSpine X1, X3, and LX9 Inversion Tables are their latest offerings that improve upon the original EP models, but at a similar price point. After using Teeter Inversion Tables and Gravity Boots over the past decade and testing the latest FitSpine series for review, I feel that Teeter's are the best inversion tables on the market and although the FitSpine offers minor improvements over the previous versions, you can't go wrong with any of their models. Teeter FitSpine Inversion Table
(1 ratings & reviews)
Join the millions who have found natural relief with Teeter Inversion Tables. The Teeter is a gentle, passive way to target pain at the source, decompressing joints to help improve spinal health and relieve back pain. At a Glance: Inversion Table Benefits Relieve Back Pain Indicated for Herniated Discs, Sciatica and More Reduce Muscle Tension and Spasm Enhance Flexibility Improve Posture Build Core Strength Through Inverted Exercise Relief in Just Minutes a Day Built for the Benefits Introduce your back to relaxation and relief with the Teeter FitSpine X1, X2, and X3 Inversion Table. The innovative FlexTech Bed is supported by an 8-point floating suspension system, which flexes as you move and enables the best decompressive stretch. The unique track design on the table bed accommodates the included Lumbar Bridge and Acupressure Nodes for targeted traction and pressure-point relief. Grip-and-Stretch Handholds built into the bed and A-Frame allow you to enhance your stretching and decompression. As with all Teeter Inversion Tables, patented wrap-around Ergo-Embrace Supports reduce pressure on the ankles and the Ankle Comfort Dial lets you easily customize your fit.

Teeter is known the world over for making the best inversion devices on the market. In this review, we detail the latest series from Teeter, the Teeter FitSpine X1,, X3, and LX9 to compare them to the competition and previous models. Overall, the FitSpine is an improved version of the popular Teeter EP-560 Inversion Table with a slightly higher price tag, but more features. If you just want the most budget-friendly table, we suggest the EP-560. If you want more features and the latest technology, the new FitSpine series is a recommended upgrade.

I’ve used Teeter products for nearly a decade now. Although I’m still relatively young, I’ve found inverting to provide excellent traction for my spine and lower back. After nearly every lower body training day when I axial load (squat or deadlift) I will spend time inverting either using Teeter’s Gravity Boots or one of their inversion tables. They’re simple to use, inexpensive, and highly effective which makes them perfect for home gyms and people who want to improve the health of their spine.

What is the Teeter FitSpine Inversion Table

The Teeter Fitspine is the latest inversion table from Teeter. An inversion table is designed to take gravitational pressure off of your nerve roots and spinal disks while increasing the space between the vertebrae in your spinal column. Although there are mixed opinions on whether they provide, true, long-lasting relief from back pain (see the Mayo Clinic’s stance here) from my experience, the short term benefits felt, even if a placebo, have been enjoyable and worth the little effort required for use.

The model we received for testing and review is the Teeter FitSpine LX9. This features everything from the other models as well as some additional comfort options that aren’t necessary, but do add to the usefulness of the unit. We will go into more detail on the FitSpine vs Teeter EP Series like their most popular model, the Teeter EP-560 Inversion Table later in this review, but the biggest difference (although there are others) between the models is that the FitSpine has an improved FlexTech Bed that due to being supported by an 8-point “suspension,” it flexes as you move around. Is this revolutionary, not in our experience, but it does feel more comfortable than previous versions at a similar price point.

As previously mentioned, I like Teeter and have for many years. Their Gravity Boots are my main recommendation for those that have a pull-up bar and no problem getting into position. However, doing the required maneuver to get into position with Gravity Boots can be very difficult and not possible for most of the population. This is where inversion tables come in handy.

The Teeter FitSpine Inversion Tables have taken what works on their previous table models and added some new features at a slightly higher, sometimes very similar price point.

The part of an inversion table that we feel is most important and is a big separator among companies is the ankle closure system. Talk to anyone who’s used an inversion table and they will tell you that the most uncomfortable part of inversion isn’t being upside down, it’s having your ankles secured by the device the company is using. I’ve used all sorts of different inversion methods with varying ways of securing the feet and, by far, the most comfortable table I’ve used is the FitSpine. In comparison to competitors, I find the foam to be more dense and less likely to pinch.

Teeter’s ankle closure system also wraps all the way around the ankle allowing you to feel secure, even when fully upside down (how I hang most of the time.) On the LX9 model, which is what we tested, the adjustment system is very quick and easy to use. This is a more expensive feature and for most people we’d suggest going with a cheaper model, but if you prefer having the ease of use allowed by the LX9, it may be worth it for you.

The other component of the FitSpine series that is improved over the older models is the ‘FlexTech Bed.’ It’s still plastic and from what I’ve seen appears to be made of the same material as their other models, the difference being that the ‘FlexTech Bed’ uses an “8-point floating suspension system.” What this amounts to is a bed that is secured in 8 different points. Is this revolutionary? Not in my opinion.

However, although the ‘FlexTech Bed’ is not revolutionary, it does feel more comfortable than previous models due to it flexing while I move about adjusting my positioning on the bed.

Lastly, there are some other features that are included with the FitSpine, however, I didn’t find them incredibly useful for myself. One is the Adjustable Lumbar Bridge which supports traction on the lower back. It didn’t feel any different using the table with it or without it.

Next are the ‘Accupressure Nodes’ which are for trigger point release. I do believe in the short term benefits of trigger point release therapy, but due to hanging upside down on the table and not having a lot of pressure resting on the nodes, they won’t really do what they’re designed to for most people, in my opinion.

The extra-long ‘Stretch Max Handles’ are nice for pushing against and getting back upright, I will say. The base model doesn’t include these, but they are a feature I do really enjoy about the FitSpine LX9.

Finally, the cup holder, boarding platform, and headrest are all nice to have on the unit, but didn’t feel necessary for my use. If you’re older and want to be more comfortable, I could see how they could accomplish that goal, however, I think people would be better off spending a bit less for the other models.

Overall, the Teeter Fitspine X Models are, in my opinion, the best inversion tables currently available. I do love the price and usefulness of Teeter’s Gravity Boots, but also understand that for most people, they’re harder to use. If you want an inversion table, it seems pretty obvious to me that Teeter is the gold standard currently. The biggest difference that I can see between the tables is the new FlexTech Bed and it’s associated features as well as the color change. The higher-end tables like the LX9 do have some additional features, but overall, the big one is the bed.

Teeter is the creator of the best-selling inversion table of all time. The Teeter FitSpine X1, X3, and LX9 Inversion Tables are their latest offerings that improve upon the original EP models, but at a similar price point. After using Teeter Inversion Tables and Gravity Boots over the past decade and testing the latest FitSpine series for review, I feel that Teeter's are the best inversion tables on the market and although the FitSpine offers minor improvements over the previous versions, you can't go wrong with any of their models. 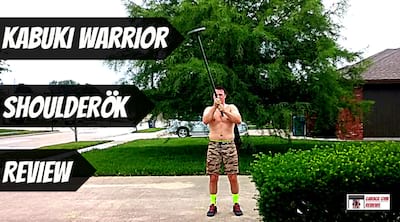 Chalk Monster is a company producing chalk that features 100% Magnesium Carbonate. It's priced well, not easily breakable, and comes with cool, unique branding. We recommend it if you're unsatisfied with other standard options. Read More 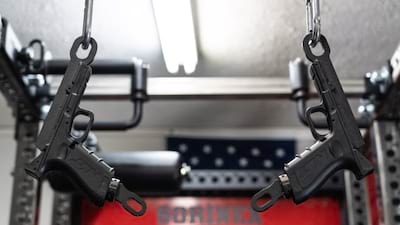 Sorinex is producing some of the best racks and rigs on the market, but in addition to the big items, they're also coming out with some seriously impressive attachments. Items like their Adjustable Jammer Arms and Indexing Chin Bar are extremely versatile and now they can add another item to their list of innovation: Sorinex Pistol Grips. The Pistol Grips from Sorinex are definitely "cool", but more than that, they're a versatile tool for anyone from the operator to the office worker for increasing grip and pulling strength. Read More

Flex Wheeler's Back Widow Attachment Review - Worth the Cost?

Flex Wheeler's Back Widow is one of the most versatile cable machine attachments ever created. It's great as a "back blaster" for lat pulldowns and rows, but works just as well for curls and tricep work. In addition to that, it doubles as a deadlift jack and also works as a landmine. Honestly, unless you're conscious of all it does, you'll forget just how often you can use it. It is expensive and we do recommend it, but only to those that will use it's various capabilities and don't want to take up space with a ton of different attachments. Read More