A Look at the Fascinating, Tortuous History of Treadmills 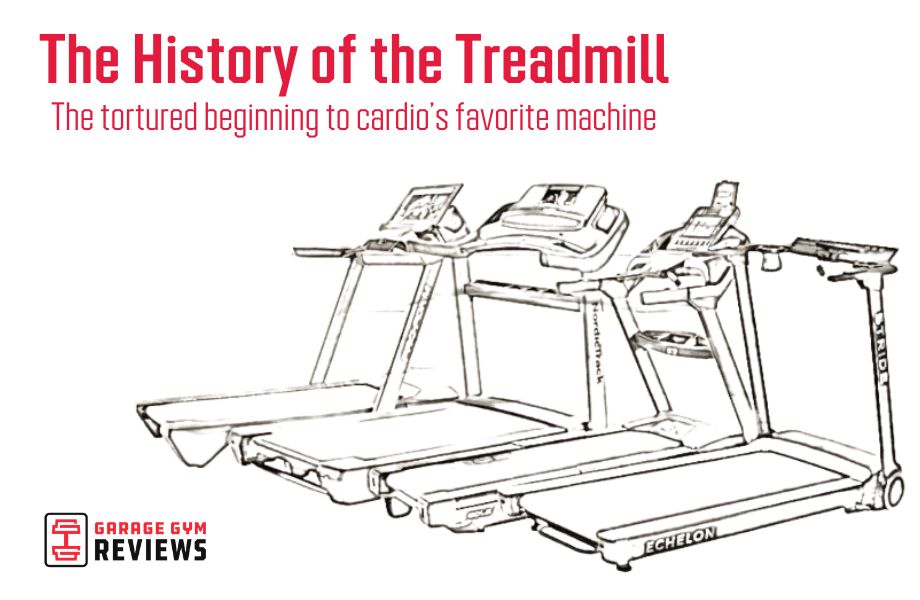 During the infamous Spanish Inquisition, it was not uncommon for an Inquisitor to hold a victim’s hand over a lit candle until they repented of their wrongdoing. Thumb screws were likewise used on torture victims in the Middle Ages. The Vikings probably took it a little too far with the blood eagle.

But if you have ever used a treadmill, you probably already knew that.

A New Take On An Old Torture

We kick off the history of the treadmill in 1818. Professional English engineer and amateur sadist Sir William Cubitt had a very English idea for prison reform: Have inmates walk until their minds turned into mushy peas.

One fine day while visiting St. Edmund’s Gaol, Sir William Cubitt, succumbing to his nature as a member of the Victorian English gentry, could not help but feel scornful toward the inmates. Their sloth and inactivity wrangled him so, and turned his mind toward finding a solution for their laxity. With his experience as a civil engineer, feelings of English superiority, and absolutely no experience working with or around convicts, Corbitt designed a device he was sure would solve the issue of prison reform for centuries.

Perhaps due to the famously bad weather in Great Britain, William Cubitt seemingly scoffed at the idea of walking outside. “We have to move at a constant pace to make sure we stay in the aerobic zone for optimal fat loss!” he wailed (unlikely).

While the treadmill would be put to use in some practical ways (it could be used to grind corn or pump water, and an idea was even floated to use it as an electrical generator), it was most commonly used to simply “grind air,” merely for the purpose of work for work’s sake.

Nearly a century later, George Orwell would write on this topic in Down and Out in Paris and London:

“We have a feeling that it must be ‘honest’ work, because it is hard and disagreeable, and we have made a sort of fetish of manual work.”

Of course, it was hard labor done by the inmates of jails such as Brixton Prison in England (and even at a prison near E. 26th St. in New York) that powered the treadwheel, not steam or oxen.

A handrail was provided to spare the exhausted inmates the indignity of falling.

You don’t often walk over to the cardio section of the gym and see someone bleeding from their eyeballs or crushing some ammonia caps before cranking the treadmill up to 2.8 and GETTING SOME.

You should have taken a look at the cardio treadmill class at Brixton Prison.

I don’t know how much prison guards in Victorian England knew about the benefits of aerobic exercise, but the brutal workouts inmates went through had to make this device the most hated exercise machine of all time.

Per the Prison Act of 1865, all prisoners were to spend at least 3 months of their sentence on a treadmill. This was seen as more humane than deportation to such horrible places as Australia and America.

These humanely treated prisoners would often spend six or more hours a day “grinding air” on the prison’s exercise equipment. In doing so they would climb the equivalent of 14,000 vertical feet. That’s like climbing the Eiffel tower 37 times in a row. Every day. Without the croissant and café.

Prison Workouts Fall Out Of Vogue

No less than satirical genius Oscar Wilde worked a treadmill during his incarceration. His death two years removed from his release from the toils of the prison treadmill may or may not be related.

Death by treadmill was not entirely uncommon, with some reports stating the machine killed an average of one inmate a week. Then, as now, prison conditions and food were each of poor quality. That, combined with the intense physical toil of the treadmill, would prove to be more than many inmates could take.

In 1898, Parliament stepped in and removed the treadmill from the British prison system. Its pointlessness and ineffectiveness at deterring crime or reforming criminals had finally reached a limit.

What’s Torture For One Man Is Medicine for Another

The first patent for a treadmill-like device, known as a “training-machine,” was filed in America in 1913. The domestication of the Cubitt torture device had begun.

However, the postwar period was when the treadmill would have its breakout success.

As many horrors do, it began with the intention of doing good. In the 1950s, Dr. Wayne Quinton and Dr. Robert Bruce (not the good guy/bad guy from “Braveheart”) of the University of Washington developed a medical treadmill. The medical treadmill, when used with a subject hooked up to an ECG device, allowed the cardiologists to diagnose potential heart problems.

A system of watching a heart rhythm on an ECG strip while the subject was exposed to varying treadmill speeds (and therefore varying heart rates) became known as the Bruce protocol (the combined Bruce/Wayne variant involved dressing like a bat, fighting clowns, etc.). Kidding. It’s a test of fitness.

By the 1970s, Dr. Kenneth Cooper had popularized a modification of the Bruce Protocol known as the stress test. Dr. Cooper would use his test to diagnose heart disease, as well as use it for  evaluating pilots for the U.S. Air Force and space program. Additionally, Dr. Cooper would develop the 12-Minute Test and the 1.5-Mile Test, both of which are still used by branches of the military, personal trainers, and my fire department.

Build It And They Will Run

Dr. Cooper had a more significant impact on popular fitness culture; he is credited (or denounced) as the man who helped spur the American running craze of the 1970’s. Along with runner Steve Prefontaine and shoe mogul (and inventor of jogging) Phil Knight, Cooper helped popularize aerobic exercise. He was one of the first scientists to identify the importance of aerobic training for heart health. In fact, Dr. Cooper is responsible for coining the phrase “aerobics,” and it is the title of his famous 1968 book on the subject.

It was this book that inspired mechanical engineer William Staub to develop the first treadmill intended for home use. The exercise machines used by Dr. Cooper happened to be bulky and expensive. NASA could afford one for its pilot training program, but the concept of the home treadmill was anathema.

Staub, a New Jersey native, called his machine the “Pacemaster 600,” and in the late 60’s, he began mass producing them in his home state (perhaps the genesis of GTL?). Dr. Cooper was a fan of the device, and even helped Staub find his first customers. Staub lived to be 97 years old, and reportedly used his invention religiously until just 2 months prior to his death.

Interestingly enough, modern treadmill designs are still working on solving the problems originally engineered into Cubitt’s treadwheel. In order to better torture prisoners, barricades were erecting between them to limit visual sensation and socialization.

Today’s treadmills seek to enhance each of these aspects rather than curb them (the scale has tipped in the torture vs. nurture debate). Increased connectivity allows users to access an entire world of classes, trainers, music, and more. With products like Peloton and iFIT, it is possible to go on a group run with friends from all around the world.

In addition to creature comforts like touchscreens and Bluetooth capability, manufacturers are offering more realistic running experiences with features like curved tracks and incline/decline features, along with immersive virtual reality running routes. NASA even created a treadmill that can mimic running in zero gravity.

The “monotonous steadiness” is becoming a full sensory experience.

If history repeats itself, you might just start seeing influencers talking about the hot new Waterboarding To The Oldies class they took at Equinox.

The History of The Treadmill FAQs

Where did the term “treadmills” originate?

The “mill” portion of the name comes from the original design’s functional use as a water pumper or corn grinder (as it was based off of ancient machines of this type). The “tread” portion comes from the poor souls who were forced to “tread” upon the machine to operate the grinder. The term “treadwheel” was often used interchangeably with Cubitt’s original paddles-and-spokes contraption.

What crimes were treadmills used for?

All crimes requiring incarceration could be punished with a treadmill, and all prisoners were mandated to spend at least three months of their sentence walking the treadmill. Oscar Wilde was in jail for “indecency” and was forced to walk on it for 2 years. Brixton Prison was the first to make use of it, and adoption was rapid throughout England in the 19th century.

What is treadmill punishment?

It’s intended as mind-numbing physical punishment to help convicts rehabilitate themselves into productive members of society. The hard labor of it all was supposed to help mold the minds of criminals, as well as be more humane than conventional torture devices.

Convicts would be forced to walk on an “endless staircase” all day without break. The pointlessness of the endeavor could be as mentally draining as the actual activity was physically demanding.

Luckily, a safety rail was installed for the prisoners to hold onto.

Ricky is a full-time firefighter with over 15 years experience coaching and personal training. He loves lifting heavy weights and hates cardio, but finds himself constantly pushing his conditioning to keep up on the fire ground. He is a former competitive Strongman on the comeback trail and looks forward to beating all of his old lifts (this time with a six pack instead of a beer keg). 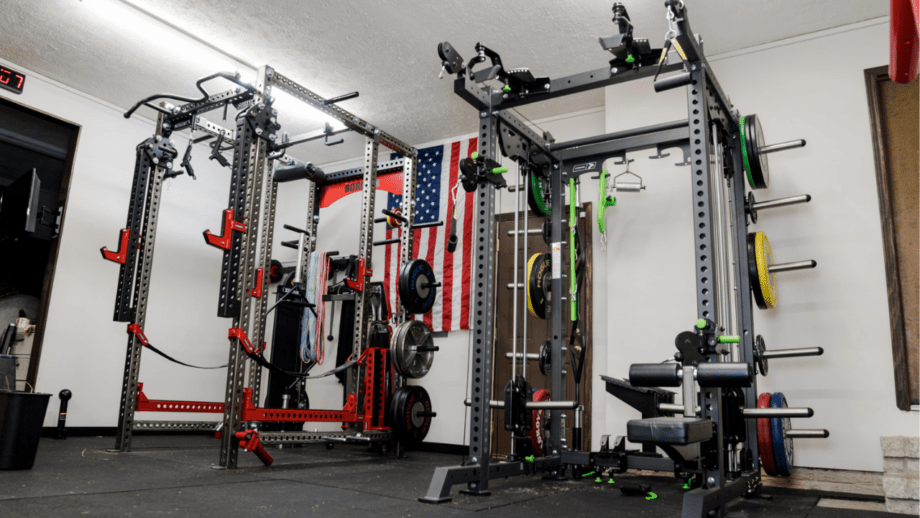 The Best Squat Racks for 2023
by Cooper Mitchell

The squat rack is the centerpiece of just about every home and garage gym in the world. As such, it should be versatile, durable, useful, and fit the space it will be used in. I have tested countless of today’s best options, putting them through heavy squats, bench presses, pull-ups (when applicable) and a number of other exercises.Based upon my use, experience, and community input, I’ve compiled the best power rack, half rack, squat stand, and fold-away squat rack for most people—including recommendations for various budgets. Read more 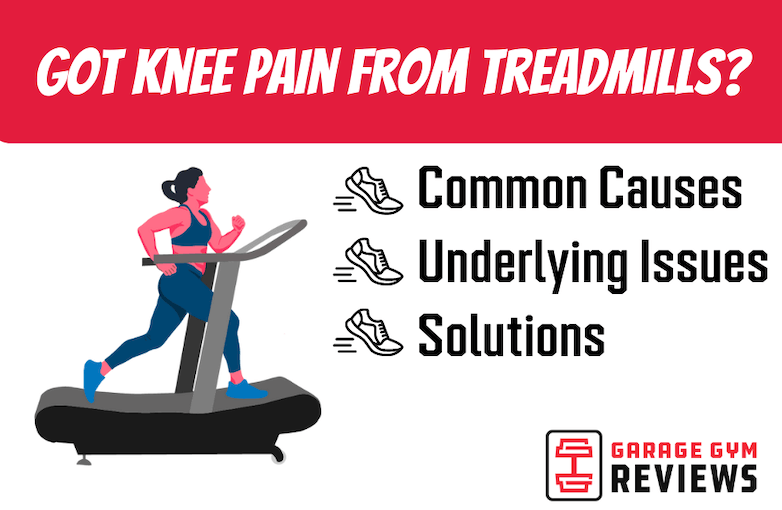 Why Do I Have Knee Pain From Treadmills?
by Lindsay Boyers

Poor posture and/or wearing the wrong shoes are the most common causes of knee pain from treadmills, but there are some other contributing factors too. Read more 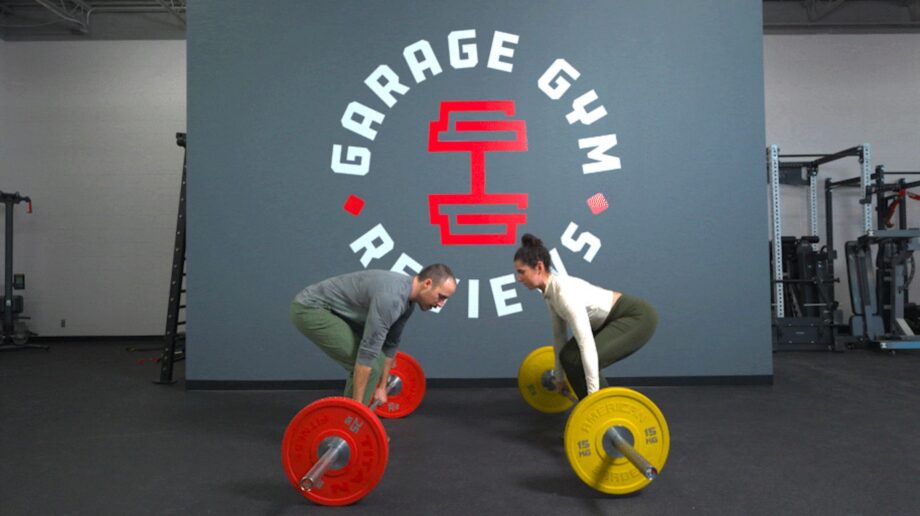 How to Stay Accountable to Yourself When Working Out At Home
by Amanda Capritto, CPT, CNC, CES, CF-L1

Working at home can be isolating and hard to stick to, even if you have a super rad home gym. These expert accountability tips will keep you going strong. Read more 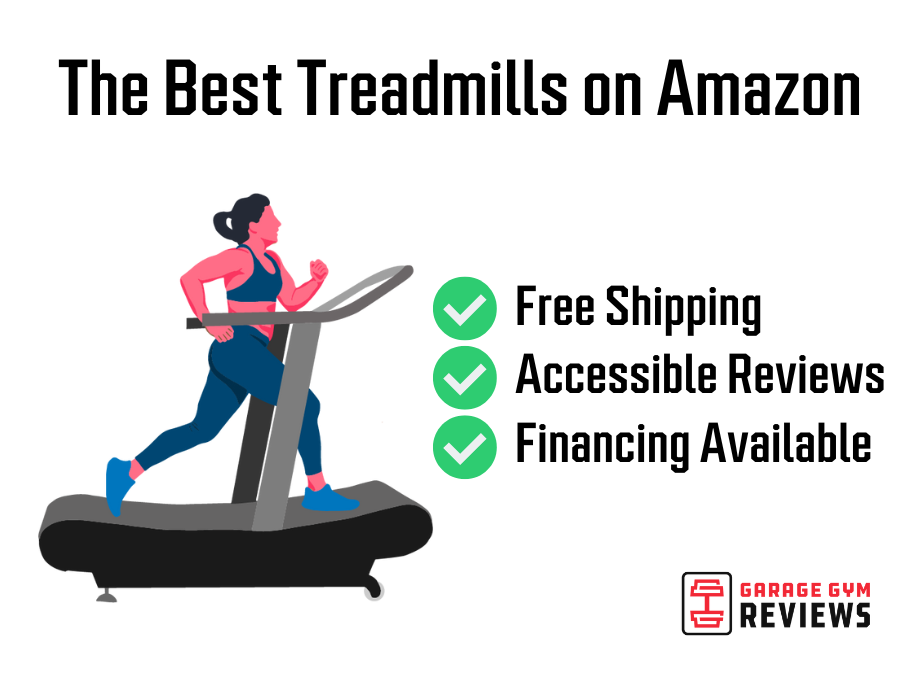 The team at Garage Gym Reviews, including myself, has personally been on some of the best treadmills on Amazon. I’m here to tell you which ones are worth it, and which should get a hard pass.  Read more