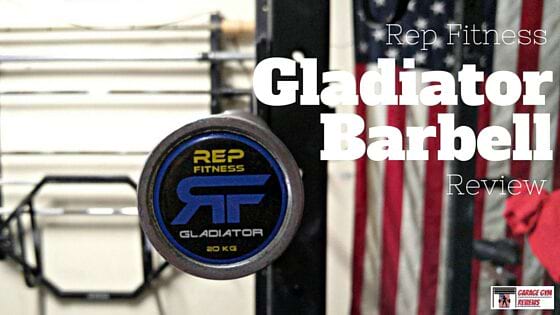 I love a good barbell.

And the reality of today's fitness market is that there are a lot available.

One thing however that isn't available as much is a solid Bearing Bar that is economically priced.

Now there's a few things that make up the sentence I just wrote.

You know, like when you give your bro a solid. It's viewed as greater camaraderie than a high-five, but less than a bro-hug. If this makes sense than here's some knucks bruh.

There's a lot of bearing barbells available that offer the greatest performance available.

However, there's few that are well priced and offer a good balance between price and performance.

The barbell I am going to review today is the above and more.

The way a barbell looks is pretty unimportant, I'll admit.

But, if you're going to spend a decent chunk of change on a long round steel bar, you at least want the bar to look pretty.

A barbell isn't necessarily meant to be flashy. There's some available that are and look pretty cool, but for the most part I prefer the classic silver look.

The Rep Fitness Gladiator Bar looks like a no frills, throw some weight on me and I'll get the job done barbell.

One part of the Gladiator Bar that I do like in reference to its looks is the end cap.

There is really only one place on a barbell where the manufacturer can get creative, and that is the end cap. If I was going to produce a barbell I would put so much effort into making that end cap look like the coolest little circle that was ever seen.

Rep Fitness, although somewhat simple, threw their bright logo on the end and although basic, I do like the blue and yellow. Especially because I'm a St. Louis Blues fan. #bleedblue 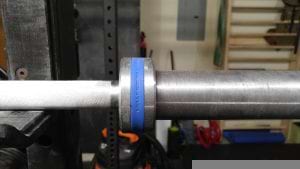 A barbell in reality is very simple.

Combine a strong, yet somewhat whippy steel with some sleeves, bearings, and put a knurl on the bar, save for the way the sleeves hold on, you have a barbell.

But, it's often the simple things that are most often messed up.

How many times have you gone to a CrossFit Affiliate or Globo gym and picked up a bar that when dropped sounds like glass shattering all around.

This happens because manufacturers use high tolerances and the gym owners don't really care how the bar sounds or is because it's simply going to get trashed anyways.

The Gladiator bar doesn't offer as low of tolerances as say an Eleiko, but overall it's a well constructed bar as immediately evidenced by the (lack of) noise it makes. The noise doesn't affect the performance, but it's a good sign of a well put together bar.

The whip of an olympic bar is very important.

When you're using a bar for something like powerlifting, you for the most part want it to be stiff.

However, for a bar that is specifically made for the clean and jerk and the snatch like the Gladiator Bar is, you want it to have some whip.

Now, for the majority of trainees, the whip of a bar isn't all that important. The reason is because you have to reach a certain level of strength to even be able to experience the whip.

The steel itself used for the shaft is very high sitting at 210k yield strength. Now, you may be saying to yourself, "doesn't a higher yeild strength equal a better bar?"

This is a common misconception that isn't necessarily true. A higher yield strength often means a more durable bar and one that is less susceptible to bending, but it does not immediately indicate a BETTER barbell.

The whip on the Gladiator Bar is not AS whippy as I would have liked it to be. But, this could be due to how high the tensile strength of the barbell is. So, there's a trade off between durability and whip.

I will say the whip is sufficient for most, but seeing as I'm not lifting over cleaning over 150 kilos, I would have liked a slightly whippier bar. 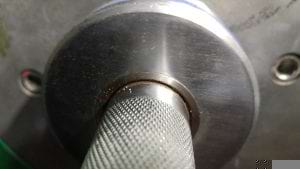 This is where the Rep Fitness Gladiator Bar really shines.

Being a bearing bar, you would expect some good spin, but this bad boy is blistering.

It spins only slightly less than an Eleiko, which is saying something. And this is how an barbell made for olympic weightlifting should be.

I always wonder why someone would be a bushing bar if they were focused mainly on the clean and jerk and the snatch. The spin of a bearing bar makes a big difference and can be the difference between a PR and you falling on the floor with your elbow smashing your knee.

Although I'm a big fan of the spin, and I'm pretty happy with the whip, the knurl is somewhat lacking.

I'm not saying it's bad knurling, it's just kind of dull and spaced out too far.

By spaced out too far, I mean that on some higher end bars, the knurl is very tight, where as the Gladiator Bar is not.

I wouldn't say the knurling significantly negatively impacts your grip, but it doesn't have that locked in feel that I get with the majority of Rogue bars. 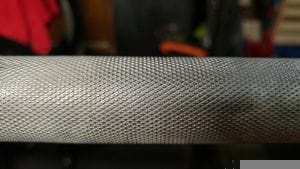 Although the knurl isn't as sharp as I would like, it is cut uniform and looks pretty exact overall. I would have liked to see a light center knurl as this is an olympic weightlifting bar and in my opinion is under utilized in the barbell business. 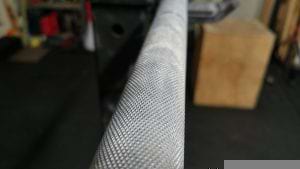 The Gladiator Bar features my personal favorite, Hard Chrome coating that should resist rust and look good for many years to come.

Hard Chrome is simply the premiere choice in my opinion, especially for garage gym lifters who's equipment will be exposed to the elements often.

Rep Fitness also followed Rogue and features cutouts in the sleeve for identification bands. This is great for affiliates who want to separate the mens bars from the women's easily for their member.s

Finally, the Gladiator Bar has a lifetime warranty that covers the bar becoming bent through normal use, coating problems affecting the functionality of the bar, and sleeves no longer spinning.

But, a good barbell can make for a better lifter and overall the Rep Fitness Gladiator Bar is one of the best value olympic bars available.

The price, sitting currently around $230 combined with the features is pretty outstanding.

I'm also big on lifetime warranties, although as I always say, the warranty is only as good as the company. 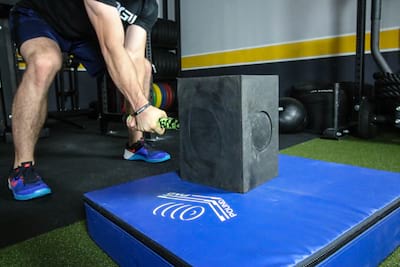 The BAMF Hammer is a great option for anybody looking to add some variety to the routine by increasing overall strength and flexibility. Being hand-made in the U.S. the hammer will humble all who dare to pick it up. It also looks really cool and can make anyone feel like Thor. Read More 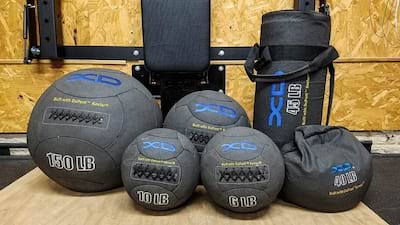 XD Kevlar Fitness Equipment is currently making some of the best medicine balls and sandbags in the industry. Combining high-quality materials such as Kevlar with well thought out designs, we recommend XD Medicine Balls to anyone who wants equipment that lasts. Read More

Angles90 are a simple, yet highly effective set of handles that is purported to increase the range of motion and require more body tension during various pulling workouts. After using Angles90 for nearly two months for all sorts of movements like deadlifts, shrugs, rows, pull-ups, and more, we can confidently recommend to anyone that wants to vary their grip for different bar based pulling (and some extension) movements. Read More 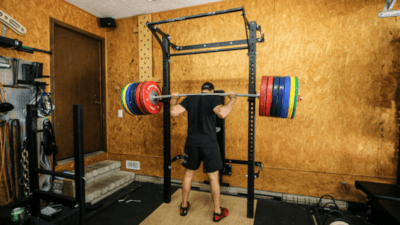 The PRx Performance Profile Pro Squat Rack is the best space saving squat rack currently available. We've used and tested many of the various options including the popular fold-away racks and undoubtedly, the Profile Squat Racks from PRx Performance are not only extremely sturdy, but also the most convenient. Read More