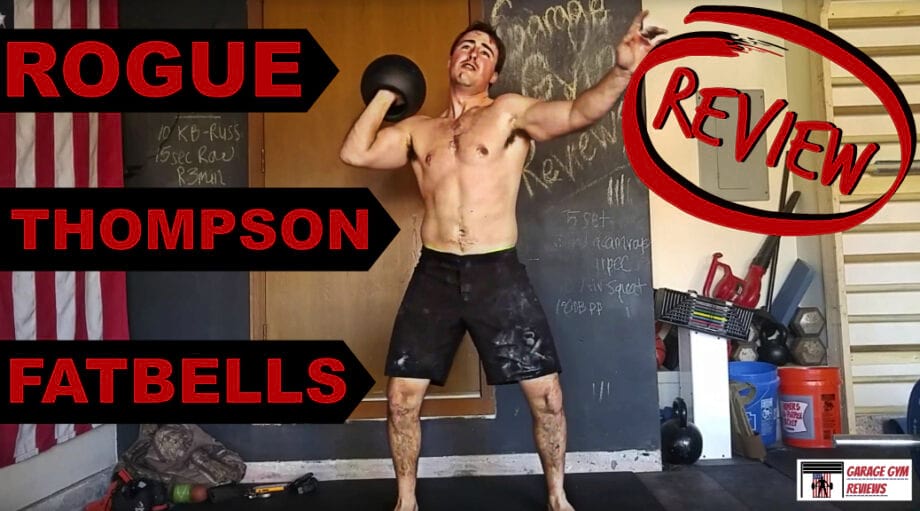 Every once in a while a fitness device comes around that changes the industry.

The dumbbell, one of the most prominent pieces of equipment in gyms around the world has stayed relatively the same for some time.

It has a handle with two weights on either side of the hand and is mostly used for pressing and pulling movements. Sometimes for snatches as well.

The kettlebell, a piece of training equipment that has also been around for quite a while, possibly longer has made it's way into the hearts and minds of the general training public in the US pretty heavily within the past decade.

The kettlebell for those unaware is mostly used for dynamic movements like swings, snatches, and clean and jerks.

Just imagine with me for a second though what it would look like to combine the two.

That's exactly what Rogue has done in partnering with Mr. 3000 himself, Donnie Thompson in creating the Rogue Thompson Fatbells.

Powerlifting was my first foray into training as my father was a powerlifter many years ago and impressed upon me the importance of strength.

When Donnie was attempting to break the 3,000 barrier (3,000 total pounds in the squat, deadlift, and bench) I remember seeing it on the cover of Powerlifting USA (a great magazine that is no longer around.)

Donnie seemed to use unique training methods in building massive slabs of muscle and one such method was using kettlebells. This may seem like no big deal today, but a powerlifter using kettlebells 10 years ago was unheard of.

The story goes as quoted from Donnie Thompson's personal site goes like this:

It was 2006 and I was training extremely hard for professional powerlifting.  One night after squats, I went to bed and started dreaming I was swinging the 48k KettleBell.  Suddenly, I pushed my hand into the center of the KB while holding the handle.  My hand was dead center inside the KettleBell.  It felt amazing.  Control and ease of movement no matter what I did with it.  IT WAS PERFECT.  I woke up and immediately drew a picture of it.  The time was 3am and I thought I was going crazy. Maybe too many KettleBell Swings?  Not sure but continued drawing my dream and this is what I came up with: 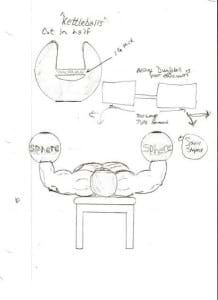 The idea for what would eventually become the Rogue Thompson Fatbells was born.

If you'd like to read more of the story, which I find pretty interesting you can find it here.

Long story short though, after talking with many companies, Rogue eventually decided to produce them and Sorinex and a company called J-Bells has taken his idea. 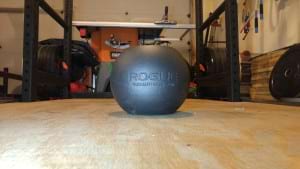 The Fatbells are made out of solid cast iron.

There's really no getting around how solid cast iron is, and is the same material many kettlebells are made of.

There is a 37 mm handle welded in the center of the bell that feels very similar to the size of most dumbbells. Because it is cast iron, it also takes chalk really well which allows you to get a great grip.

They look very similar to planters pots as I saw many comments when Rogue first introduced them, and one reason for that is the bulbous shape and the flat machined base. 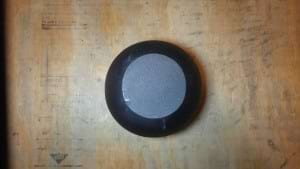 As Rogue seems to do with just about every other piece of equipment they produce, it's powedercoated black.

Also, to help identify the size of the bell, there is a stripe running on the inside of lip of the bell. It's a nice touch, and will help in commercial gym settings.

That being said, I don't think the stripe was very well done. To me, it looks like somebody took a paint brush and just slapped it on. I would have liked to see a perfectly symmetrical line as I don't think it would have been that difficult, but this is kind of just me knit picking.

The Fatbells are solid, simple as that. They aren't overly complicated, and the 53 lb. Fatbell I purchased is just over 53 lbs which is pretty good considering they're made of cast iron.

Due to this being a completely new take on the dumbbell/kettlebell, the construction is not the most important feature.

What you really want to know, and what I wanted to know was simply:

Why should I purchase Fatbells versus dumbbells or kettlebells?

First off, I'd like to say, all three have their place.

But, I want to be clear when I say, if I could only choose one, I would choose the Rogue Thompson Fatbells.

You can do everything you can do with a dumbbell with the fatbells. In my opinion, they're a dumbbell replacement that will lead to less wrist injuries as well as a better connection. You can also use them for one arm swings, snatches, clean and jerks, and just about everything you can do with kettlebells except for two handed swings. Two handed swings are considered by many in the kettlebell world to be an improper use of the kettlebell anyway.

This is a little hard to explain, but in speaking with Donnie Thompson, the creator of the bells, he spoke a lot on how the muscles became much more engorged with blood than when you use the traditional dumbbell and kettlebell. This is something I also noticed, but mainly at higher repetitions.

When you place your hand inside of the sphere, it feels much more a part of your hand than any a dumbbell and especially a kettlebell. As is written on the description on Rogue's website:

Every single infinitesimal point on the surface of that sphere is equal distance to the center of your hand.

This causes fewer shearing forces on your joints and causes more load distribution on the muscles and connective tissue. You really have to use one to feel it.

Due to the Fatbells diameter, when pressing such as on the bench press, you can get a much better contraction due to being able to lower the Fatbells into a deeper stretch. With dumbbells, they're so big and awkward they just get in the way causing many egos to grow (you know what I mean if you've ever been to a globo gym and seen the guy benching with 150 lb. dumbbells.)

Due to the flat machined base, the Fatbells don't roll around. They also don't rock back and forth in your hand due to the weight being placed 360 degrees around your hand. They're also easy to dump and I never felt any worry about getting cut by the edge of the bell as its rounded and smooth. 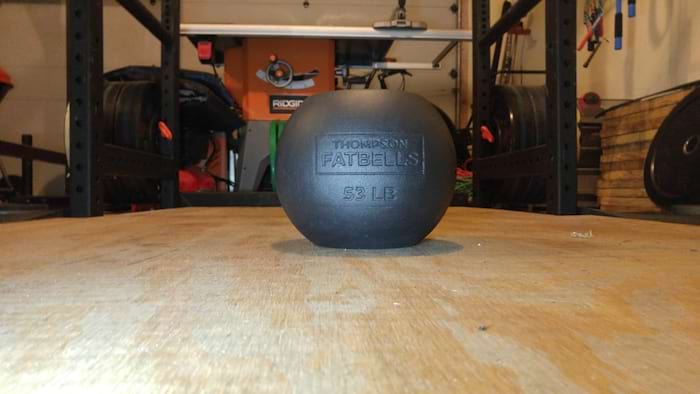 My main dislike with the Fatbells is in their weight increments.

The reason they do this is because it's a great way to get people introduced to the Fatbells and they mimic the weight increments of kettlebells.

In my mind though, kettlebells will always have their place due to the way the weight is loaded below the handle. The Fatbells are a dumbbell replacement. Meaning they should come in increments of 5 lbs which I believe will happen when more people begin to adopt using the Fatbells.

Imagine walking into a gym and instead of dumbbells, you see a row of Fatbells. Eventually that will happen and it will be GLORIOUS!

These are not a fad product.

My suggestion would be to try and get one in your hands. Many gyms will soon have them I imagine or you could order one for yourself.

They've been out for under a week and are already sold out of some sizes.

The revolution has begun!

The Rogue R-3 Power Rack is one of the best selling squat racks of all time...and for good reason. The Titan T-3 Power Rack is a rack that takes many of the same features as the R-3 at a vastly lower price-point. We put them against each other to see which is the best value. Read More 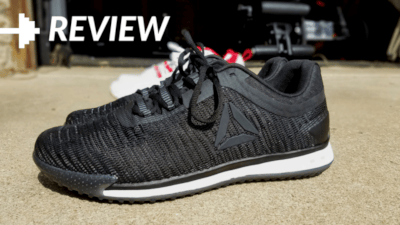 The JJ 2 Training Shoes from Reebok are a great pair of training shoes for those looking to train for sports in a similar manner as JJ Watt, the person the shoe is named after. Although they aren't as versatile as the Reebok Nano Series, they are still an excellent pair of trainers. Read More

The Rep Fitness PR-5000 V2 Power Rack is simply put, the best piece of equipment that Rep Fitness has released to date. It rivals the Rogue Monster Series and Sorinex XL Series of Racks at a much lower cost and includes a full suite of attachments. If you're looking to outfit your home gym or commercial gym with a new rack and want high-end quality with infinite expandability that is priced lower than competitors (and don't mind an imported rack) then we highly recommend the PR-5000 V2. Yes, there are things we could see improved, but overall, this is a winner. Read More 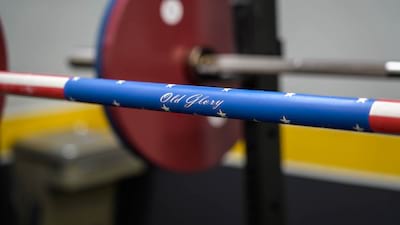 The Believe Gear Liberty Barbell is a 20KG Cerakote Barbell painted to look like the American Flag. Although it's one of the coolest looking barbells we've seen, it's also a great performer that with 190K Tensile Strength Steel, Bronze Bushings, and 100% of the profits being donated to the Old Glory Project. Read More