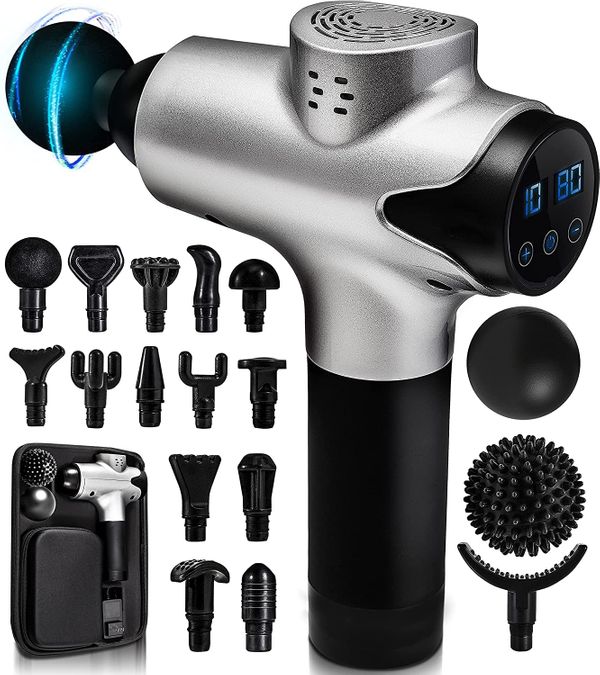 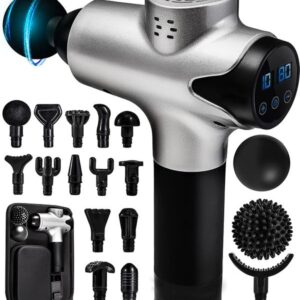 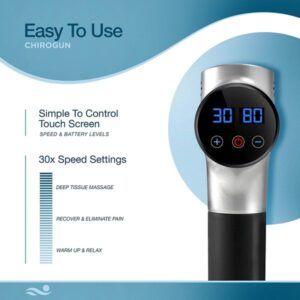 The Chirogun has a massive following on Amazon with over 9,000 reviews and a 4.5-star rating. It’s no surprise why this massager is so widely used and liked. The Chirogun comes with an impressive line of accessories at a fraction of the cost of its competitors. Featuring 15 interchangeable heads, two bonus massage balls and 30 adjustable speed levels, this handheld massage gun is intended to reduce stiffness, improve flexibility and boost blood flow.  For just $100, the Chirogun is a solid budget-friendly massage gun.

The Chirogun is quickly emerging as a popular, budget-friendly massage gun. For $100, it comes with 15 massage heads and two bonus massage balls (one hard and spiky; the other soft).

The variety of attachment options allows you to more accurately target specific muscle groups. Now, it is not likely that you will be using all the attachments, but it is nice to have them on hand if needed. They are mounted onto the gun using a push-type installation that’s easy to do. But, some users reported that pulling the attachments off was tricky.

The Chirogun uses a touchscreen to operate; it displays speed and battery levels. Offering 30 speed levels that max out at 3,200 PPM, the Chirogun allows you to make small and safe increases to the intensity of the massage. That said, with so many speed levels, the difference between two successive speeds is hard to detect.

Using the touchscreen, you navigate from the lowest to highest setting with a push of a button. So while 30 levels sounds great, having to switch between so many speeds can be cumbersome.

The Chirogun is designed with a 90-degree, T-shaped handle that does feel bulky and uncomfortable to some. Weighing 5.31 pounds, it certainly is not lightweight. The Chirogun features a fast charging battery intended to last up to 6 hours.

However, many reviews reported that the Chirogun did not hold its charge as promised. Chirogun does not offer any information on stall force or amplitude which are key specs to any handheld massage gun. Buyers have reported the stall force ranging from 10 to 30 pounds and a 10-millimeter amplitude but accurately measuring these features is tricky.

Chirogun
Rated ERROR out of 5 stars
0 ratings
Tried it? Review this product

Be the first to review “Chirogun” Cancel reply

There are no reviews yet.

Is the Chirogun worth the hype? Its affordability and multiple attachments are notable features making it attractive to many. While this gun did not knock our socks off, it makes for a good entry-level massage gun for home use.