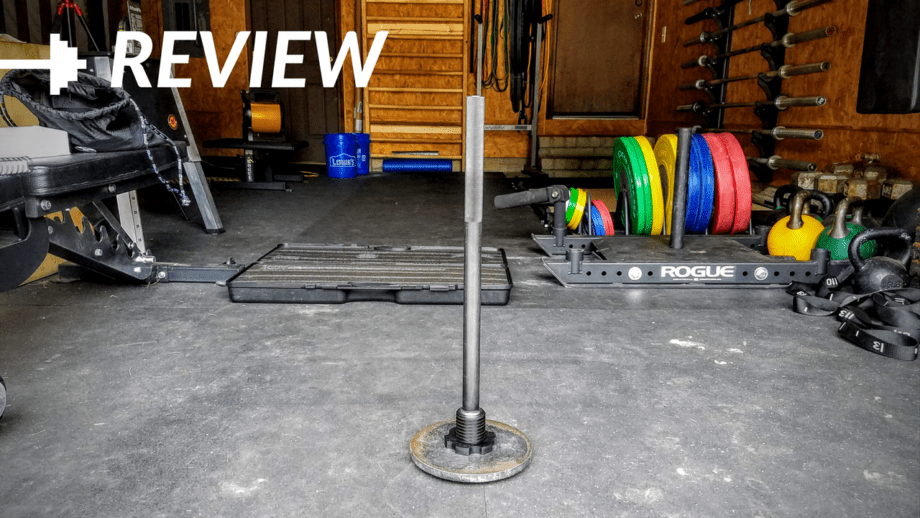 We review free products that we receive and participate in affiliate programs, where we may be compensated for items purchased through links from our site. 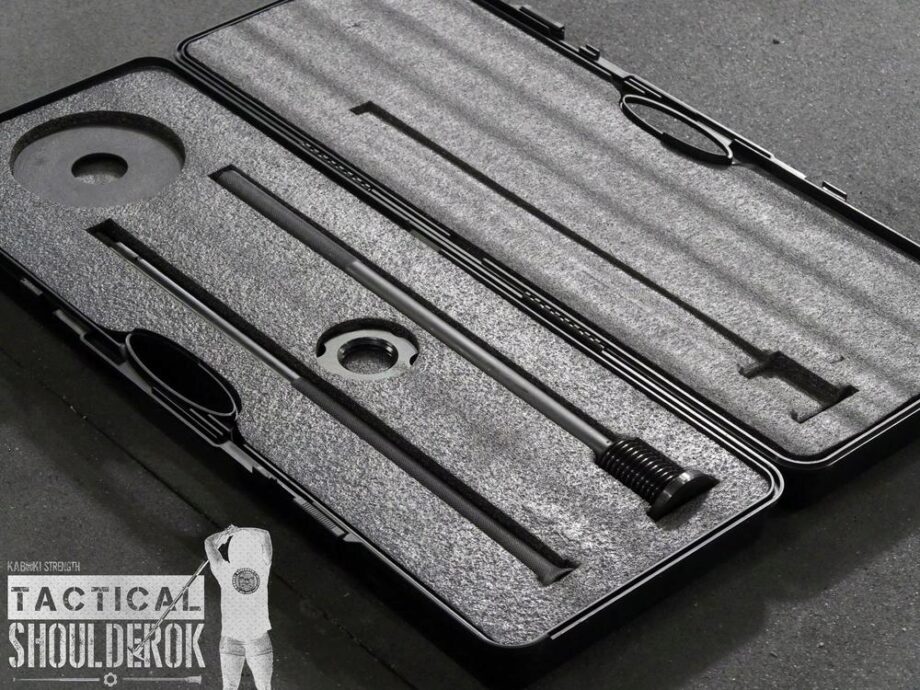 Introducing the Tactical Shoulderok - a breakdown, premium version of the popular Shoulderok we released to much acclaim over 2 years ago.

What is the ShouldeRok for?

The ShouldeRok is a piece of equipment I am very fond of. When Chris Duffin initially released the original ShouldeRok, nobody really knew what its purpose was. Sure, Gada Swings and Indian Clubs have been around for centuries, but at least in the Western World, they had never made a huge impact. Thankfully, Chris knew this and went on to educate the masses on its benefits not only for those chasing general fitness but also for the bleeding edge competitors in all physical sports.

The primary purposes of the ShouldeRok are to create proximal stability, gain distal shoulder mobility, and engage/strengthen the muscles required during the movement. In a nutshell, the ShouldeRok will cause you to brace tighter, get stronger, and more mobile in the upper body. I would say these are simply claims, but I've been using the original ShouldeRok since it's introduction over two years ago and all of these are true.

Starting out, the ShouldeRok can be difficult to use. It takes a fair amount of coordination and strength even when starting light, but once mastered, there are few better tools for warming up and learning how to brace than the ShouldeRok.

Although I have owned a ShouldeRok for some time, the new Tactical ShouldeRok provides unique features that increase its versatility and thus my use of it in the gym.

The ShouldeRok showed up on my doorstep in an unfamiliar box. After doing so many shoe and barbell reviews lately, it was nice to receive something out of the ordinary (and not have to break out the power tools to open the box.)

Although the Tactical ShouldeRok has benefits to the user, I can only imagine the benefits it has to the guys at Kabuki Strengths shipping department.

If you notice, there's a big fat "Made in the USA" sticker topped with the good ole' red, white, and blue. Although we have readers spanning the globe, I am a patriot and love to see products still made domestically (in other words, I was happy to see this sticker.)

Once opened, the beautiful black case appeared with some excellent artwork.

It didn't take long before the black case was ripped out of the stale fluted corrugated medium wrapped in flat liners and on the hard rubber stall mats many a sweat drop has soaked.

Ahh, don't you love it when a company pays attention to the details?

Before I really dive into the nuts and bolts of the sleeker, more portable cousin of the ShouldeRok, I'd first like to give some words on Kabuki Strength. We at GGR review a lot of equipment and the amount, as well as the frequency of reviews, will only continue to escalate as our readership grows. Seeing that we encounter such a wide-ranging number of manufacturers, I cannot stress enough how refreshing it is to see companies innovate and provide attention to details.

The original ShouldeRok was in all reality pretty revolutionary. The Gada Swing has been around for hundreds, if not thousands of years yet the only loadable versions we had were ones filled with sand or buckshot. Being able to load a swingable mace with the plates you had lying around was one of those, "it's so simple, why didn't I think of it" ideas that seem to come out every so often.

Not only is the ShouldeRok a great invention, but Kabuki Strength is also flat-out producing some of the best equipment available. We reviewed the Duffalo Bar not too long ago and have found that overall, few companies are focusing as much on the particulars as Kabuki Strength.

The Tactical ShouldeRok is a perfect example of this. Let's start with the carrying case.

First off, the Tactical ShouldeRok did not need to come with a carrying case. That said, I think it's pretty impressive that Kabuki Strength decided to think outside of the box on how to bring a unique touch to an already special product. The carrying case is a retrofitted case used for rifles and not only looks cool but also functions well.

As you can see, everything you need has a spot, and it greatly appeases my OCD side.

The Tactical ShouldeRok comes with:

As with just about anything created by Kabuki Strength, the Tactical ShouldeRok is both unique and well made. Every piece of the mace is coated in black oxide that not only looks tacticool (see what I did there) but should also provide significant resistance to rust.

Starting from the top, the handle features the updated flared end to prevent the handle from flying out of your hands as well as a longer knurled section than the first released versions of the ShouldeRok. The flared end is made by heating the metal until it's red-hot and then turning it on a metal lathe while inserting a pin that creates a uniform flair. This process results in a functional end that retains the knurl.

The knurling on the ShouldeRok has been improved since the original release of the ShouldeRok (the one I have) that is less sharp, yet just as grippy. Although at first it can cause some wear on the webbing of your hand, the knurling will eventually wear down some and your hand will callous.

Also improved on the Tactical ShouldeRok is the length of the knurl. Some people, such as my Wife, like to choke up on the ShouldeRok due to their height and having the extra long knurl provides more versatility for movements as well as users. These features have both been adopted by the standard ShouldeRok, but are new since its original introduction.

The business end of the ShouldeRok features a 2" wide thread that accommodates Olympic plates and will allow as much weight as you could ever swing (a 25 lb plate alone is insanely hard.) To keep the plates secure while allowing them to be easily replaced, Kabuki Strength includes a CNC machined nut that is easy to grip, stay tight, and remove. If you're doing a long session, you may have to tighten the nut somewhat regularly to keep it flush with the plate, but I've never had a worry of it coming undone on its own.

The threads on the ShouldeRok must be precise, and despite me having used the original ShouldeRok 100's of times, its threads are still as smooth as the day I received it.

Little touches like the smooth welds and branded end cap make the ShouldeRok feel much more like a premium piece of technology than a strength tool, which is exactly why we rate Kabuki Strength as one of our favorite companies currently manufacturing equipment.

Although the Tactical ShouldeRok is much like the traditional, it features two unique features that cause us to rate it higher than the original.

First is the ability to unscrew the top handle.

The ShouldeRok is quite a bit longer than many traditional maces. Chris Duffin designed it this way to maximize balance as well aseccentric opening and the requirements for muscle engagement and stability. Unfortunately, traveling with the traditional ShouldeRok is pretty difficult, especially for those who go to commercial gyms.

What the Tactical ShouldeRok does is allow you to unscrew the two parts and either carry them in the case or throw them in your gym bag and head on your way. This feature alone will be worth the extra cost for many people.

But really, the feature that most drew me in was the knurled section on the bottom half of the ShouldeRok.

I love theability to load various increments of weight on the ShouldeRok, but sometimes I wish it was shorter. Thankfully, Kabuki Strength thought this as well and decided to knurl the bottom part of the ShouldeRok allowing it to be used as a loadableIndian Club.

I now find myself using the ShouldeRok even more for things like one arm swings as well as various wrist exercises.

The ShouldeRok is truly one of the best strength training tools to be released within the past few years. It's my go-to warm-up device and is used for all sorts of things in our gym from swings to one-arm lifts.

If you don't have one yet, we suggest going with the Tactical ShouldeRok for its extra versatility. If you don't feel like the added portability and ability to use the shorter handle is a benefit you'd use, then stick to the less-expensive standard ShouldeRok. Either way, your physique, mobility, and strength will thank you.

The Tactical ShouldeRok is a great tool, but as with everything that comes to GGR HQ, there are some things that could be improved.

The second improvement we'd like to see is kind of out of the box and may not be feasible, but some sort of rubber weighted attachment for the weighted end of the ShouldeRok that would allow it to be used as a sledgehammer. This would allow for increased versatility although the welds may not be able to hold up to the force.

The JJ 2 Training Shoes from Reebok are a great pair of training shoes for those looking to train for sports in a similar manner as JJ Watt, the person the shoe is named after. Although they aren't as versatile as the Reebok Nano Series, they are still an excellent pair of trainers. Read more

The Run Rocket is a Sprint Resistance Trainer that allows you to add resistance to forward movement such as sprints, sled drags, broad jumps, and more. After using and testing the Run Rocket over 60 days with athletes of all levels, we can confidently say the Run Rocket is effective at increasing sprint speed, jump height, and more. We give a high recommendation. Read more

The Rogue Cerakote Barbellsmay look cool, but the corrosion resistance provided by the Cerakote coating is actually a very effective innovation in barbells. Although Rogue isn't the first to add Cerakote to barbells, they are doing it at a better value than just about everyone else. Read more

Pound Padmakes a simple product that does one thing extremely well, reducing the noise of dropping weights. Combining high-quality foam with a durable shell, Pound Pad's are the best option currently available for reducing the noise associated with dropping barbells. Read more